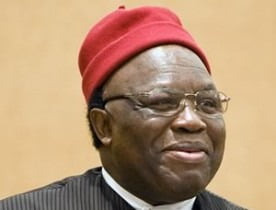 The Ndigbo Unity Forum has endorsed the candidacy of Prof. George Obiozor as the next President-General of Ohanaeze Ndigbo Worldwide.

The President of NUF, Augustine Chukwudum, made the endorsement in a statement made available to newsmen in Enugu on Sunday, adding that election to the office will hold in January 2021.

Chukwudum said that NUF also welcomed the endorsement of Obiozor by Imo State stakeholders as well as stakeholders from other states within the South East, including from prominent politicians and captains of industries of Igbo extraction.

According to him, the overwhelming endorsement and support for Obiozor’s candidacy is a welcomed development.

“Obiozor, former Nigeria ambassador to the United States of America (2004 – 2008), has what it takes to lead Ndigbo to greater heights and restore the glory of Ohanaeze Ndigbo as the apex Igbo socio-cultural group,” he said.

Obiozor was also Nigeria’s High Commissioner to Cyprus and later Ambassador to Israel from 1999 to 2003.

He was once the Director-General of the Nigerian Institute of International Affairs, Lagos.

The NUF boss noted that some previous leaders and people in prominent positions in the group had sold out interest of Ndigbo for their selfish personal gains and aspirations.

He said: “It is unfortunate that Ndigbo forget things easily which is not good because we are supposed to document history of the past on paper and in our hearts so that we cannot continue to be hoodwinked.

“However, NUF is there to put things in order and unite Ndigbo under a true and formidable leader after we had been in disunity for the past 50 years (1970 to 2020) after the Nigerian civil war.”

Chukwudum, however, called on all delegates of Ohanaeze election to make sure that all hands are on deck in electing Obiozor as the next President-General of Ohaneze Ndigbo.

He said: “NUF is raising this alarm because we do not want the past to repeat itself, where leaders and key office holders in Ohanaeze Ndigbo are easily swayed with money and other inducement to work against the collective positive purpose of Ndigbo.

“The warning has become imperative now that 2023 Presidential Election is fast approaching and we need someone we all can trust and work together with to actualise Igbo presidency in 2023.”