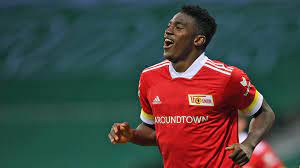 The 24-year-old striker is expected to leave Union Berlin this summer with Nottingham Forest believed to be close to signing him.

There are claims that a move to Forest is on the cards and the newly-promoted Premier League outfit have agreed to pay a fee of £17.5m for him.

But the forward is yet to join the club and Nottingham Forest may have to hurry as it has been claimed one more Premier League club have their eyes on him.

Awoniyi is one of the strikers Newcastle have watched and he has admirers in the club’s recruitment department.

The club is still focused on securing the agreement to sign Reims forward Hugo Ekitike, but alternatives have been drawn up.

And the Union Berlin forward is one of the players they could move for as an alternative to the Reims youngster.

Nottingham Forest is close to completing a deal and will hope that there are no hiccups towards signing Awoniyi this summer.

If things had worked out differently, perhaps Awoniyi would not have had to leave Liverpool in order to make his name on the big stage.

It is no secret that Jurgen Klopp held the young Nigerian in very high regard. And, if it wasn’t for those pesky work permit problems, Awoniyi could have provided back-up to arguably world football’s most star-studded frontline at Anfield.

Then again, it’s fair to say £6 million to Union Berlin in the summer of 2021 did Awoniyi’s development the world of good. A striker who would have been little more than an extra in Liverpool’s all-star cast thrived in a leading role in the German capital, scoring 20 goals in all competitions during 2021/22.

According to The Telegraph, Awoniyi is set to earn coupon-busting Union a cool £12 million profit, with the 24-year-old on the verge of becoming the most expensive acquisition in Nottingham Forest’s storied history.

After missing pre-season medical tests on Tuesday, Awoniyi reportedly bid farewell to his Union team-mates this morning. What’s more, he was conspicuous by his absence as Urs Fischer’s side took to the training pitch for the first time since the end of last season.

“I saw him,” said Fischer, who has guided unfancied Union into Europe in each of the last two campaigns. “But please don’t dig deeper now. I won’t say anything about that.”

There is no guarantee that Awoniyi – even at £17.5 million – will still be Nottingham Forest’s record signing come September. Benfica want £30 million for Goncalo Ramos while Morgan Gibbs-White of Wolves will cost at least £20 million.