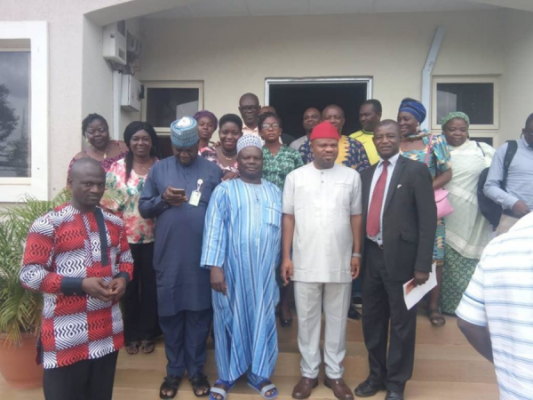 The new president of the Nigeria Union of Journalists, Chris Isiguzo, on Tuesday promised to instill discipline in the union so as to regain its past glory.
Isiguzo said this when the NUJ FCT Council welcomed him to the NUJ National Secretariat in Abuja.
He said that the union over the years had derailed, hence the need to get it back on track adding that NUJ had enormous goodwill.
The president said the union degenerated to a low level and we have to do all possible to regain the ethics of the profession.
According to him, the major thing in my campaign promises has to do with discipline and order in the system.
He said: “Any society that pays lip service to law and order has only a matter of time to come crumbling.
“Across the board today there is a high level of indiscipline and that is one thing we are going to change, there must be discipline in the system.
“If you are a chapel chairman you do your job as a chapel chairman, if you are a council chairman you do your job as a council chairman.
“Nobody is going to take the job of the other, we have had situations where the president goes straight to the chapel and takes decisions and the council chairman will not even know.
“We must introduce discipline in the system so that as a journalist you must appear as one.
“The union must appear as the voice of the voiceless, the conscience of the society, so there must be order in the system.
“We are going to tackle the issue of welfare for members of the union, because a situation where our members work tirelessly with meager salary will no longer be acceptable.’’
Isiguzo said that a situation where every other media platforms packed up because of high level of economy that was involved in maintaining such platforms would also be looked into.
Speaking, the National President of the Nigeria Association of Women Journalists, Ifeyinwa Omowole, pledged the association’s support noting that women were reliable backup for any administration.
She said the struggle to instill discipline would not be an easy one, hence the need for the women to support the administration with prayers.
The association’s president led the women to offer prayers for the new president for a fruitful tenure.
Earlier, the acting chairman of the FCT NUJ Council, Primus Khanoba, also pledged the council’s support and urged the new president to carry everyone along.