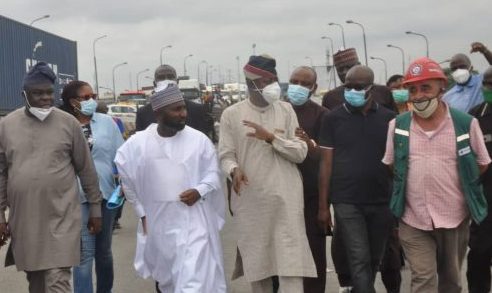 The Chairman, House of Representatives Committee on Works, Alhaji Abubakar Kabir, has pledged the commitment of the National Assembly towards adequate funding and completion of all road projects in Lagos before 2023.

Kabir said, during the inspection tour of roads in Lagos on Sunday as part of oversight of projects in the South West, the state deserved more roads because of its importance to the economy of Nigeria and West Africa.

He said the oversight was to address funding, technical and other issues affecting quality and fast road delivery in Lagos State.

“We are here to help President Buhari to complete all the major projects before the end of his tenure, that is May 29, 2023.

“And as you know, Lagos is very important in Nigeria. It is the commercial and business nerve centre of the entire West Africa; Lagos is critical, Lagos is key,” he said.

He said special attention was being given to Lagos roads because the state played host to the nation’s major ports, airports and other critical infrastructure, hence the need for more motorable roads.

Speaking on phase 2 emergency rehabilitation of the Eko Bridge project, which is to begin on June 4, Kabir said the committee would ensure quality, durable construction on the bridge, adding that, the contractor promised the repair would last 25 years when completed.

Kabir said the committee was also able to secure the commitment of the contractor to speed up work on the expansion joints and other components.

Kuti said the Apapa-Oshodi-Ojota-Oworonshoki Expressway reconstruction and rehabilitation project would be delivered this year, Lagos-Ibadan Expressway would be completed in 2022, adding that all other delivery dates would not change.

He assured that the emergency repairs of Eko Bridge (Phase 2) would begin from June 4 to August 13.

The Federal Controller of Works in Lagos State, Olukayode Popoola gave a brief of the repairs on Eko Bridge, which included repairs of damaged expansion joints, peirs and bearings.