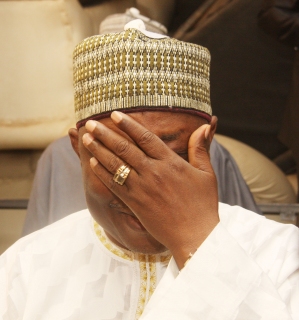 Esai Dangabar, one of the six accused persons being prosecuted by the Economic and Financial Crimes Commission on a 16-count criminal charge bordering on conspiracy and criminal breach of trust for their role in defrauding the Police Pension Office to the tune of N32.8 billion, was on Thursday arrested for interfering with the properties, which the court had ordered forfeited to the Federal Government.

But Dangabar approached the Court of Appeal, Abuja division to challenge the order of the High Court to have his properties forfeited. The appeal court, in a unanimous ruling on July 24, 2012, dismissed his application. In a ruling read by Justice Kolawole Bada, the Appeal Court resolved the three issues raised by Dangabar in favour of the EFCC. Two other justices who held the same view were Justices Bukar Chua and Husseini Mukhtar. The court ruled that the interim forfeiture order pending the hearing of the criminal charge preferred against him is provided for under the EFCC Act. “The court, having been given that power, the exercise of it has not taken away the accused right to fair hearing”, the three justices reasoned.

The court further ruled that the provisions of Section 28 and 29 of the EFCC Act is validated by Section 44 (2) of the 1999 Constitution and is therefore constitutional. Additionally, the court ruled that the presumption of innocence cannot be interpreted to allow a suspect to retain the proceed of the alleged crime made against him. Accordingly, the court ruled that Section 34 of the EFCC Act was substantially complied with by the lower court. He has again proceeded to the Supreme Court challenging the Appeal Court judgement.

Dangabar and his co travellers returned to the high court to challenge jurisdiction and prayed the court to quash the charges against them. But on November 12, 2012, Justice Mohammed Talba of High Court of the Federal Capital Territory, sitting in Gudu, Abuja dismissed the applications to quash charges as the judge said the applicants failed to supply relevant material before the court to warrant the quashing of the case against them. He also said that so far, based on the proof of evidence before the court, the prosecution has presented his case in such a way that a prima-facie has been established against them.

A statement from the EFCC said that, “while the public has been warned to stay away from the aforementioned properties and other properties belonging to other accused being investigated by the EFCC, trial in the substantive case of Dangabar and others who were arraigned on May 28, 2012, comes up on January 28, 2013.”