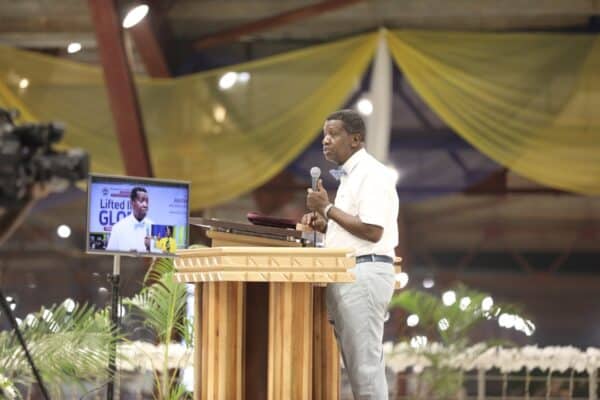 Pastor Enoch Adeboye, the General Overseer of the Redeemed Christian Church of God, has revealed how he was saved by divine intervention during the Nigerian Civil War.
Appealing to Nigerians against reprisal attacks on South Africans over recent xenophobic attacks on Nigerians in their country during the September Holy Ghost Service of the church at the Redemption Camp, he said his experience at the University of Nigeria, Nsukka has taught him that retaliation leads to escalation of crisis.
He said before his message for the service, with the theme: Lifted into Glory: “I want to make a very special appeal to you; I want to beg you not to think of retaliation against South Africa. And I will tell you why. I have seen a bit in my 77 years on earth.
“In 1966, just before the Civil War, Colonel (he was Colonel then) Odumegwu Ojukwu announced on radio that he could no longer guarantee the safety of those who came from outside the Eastern Region; he told all of us who were not Easterners to go home. I was a student at the University of Nigeria, Nsukka (Eastern Part of Nigeria) then.
“Our brothers of Eastern origin sympathised with us because our studies in Nsukka was coming to an abrupt end. The university authorities called a meeting after which they told us they were making arrangements to transport those of us who were not of Eastern origin back to our Regions.
“But then suddenly, news came over the radio that the students of the University of Ibadan had gathered all the brethren from the East and were determined to hold them until everybody from Western Region in our university had returned home.
“Immediately, everything changed! All our friends from the Eastern Region began to hold meetings as to how to keep all of us who were from other Regions in the East until the return of all of their own brothers.
“In my life, I can could count three or four occasions when I had known fear in the real sense of the word. I knew it that day!
“There was a man among us from Ekiti, who was noted for expensive jokes.
“While we were trembling in fear, he said: ‘Well, my own case is simple, my wife has just had a son, if I die now, nobody will say I never came into the world.’
“Suddenly, the possibility of dying came to us. You don’t know what it means to be in another man’s land, not knowing what could happen overnight!
“Be careful; don’t retaliate against South Africa. Because of the Nigerians who are still in South Africa.
“It took divine intervention to get us across the River Niger again. The moment we noticed what was happening those who had money quickly left to board vehicles from Nsukka to Asaba.
“I had just won what they called in those days Senate Scholarship as the best student in the Mathematics Department. It meant the Senate of the University was going to pay my school fees, my allowances. I had spent every money I had because I knew money was coming and was down to zero! I had no money, even if I wanted to run away.
“Now, let me tell you one thing (and am sure many of you know it): anytime they say that a University is rioting; the people who are actually rioting are always less than ten percent of the population of the University.
“That is what is happening in South Africa; the average South African is a decent person. Those who are causing the trouble are not many.
If you have a South African living near you, show them love, protect them from any harm because even if the Government were to repatriate all Nigerians from South Africa; within the next two months, some will go back.
So, for the sake of your own kith and kin: Don’t retaliate against South Africans.
“Let us leave the situation for the governments of the two countries to handle. Pray for them that God will give them wisdom, give them understanding and give them the ability to do it.”

The Message
Beginning his sermon with the usual altar call, he pointed out that every sinner is a prisoner of the devil, a prisoner held in bondage, kept in a dungeon.
He said sinners lawfully belong to the devil and are therefore in a hole from where they have to cry out for help by repenting of their sins because when sinners cry out, their sins will not allow the only One who can help them, to hear.
He said the difference between the sinner and the saint is that the saint heard the truth and responded.
The truth, he explained, is: “There is salvation in Jesus and Jesus alone.
“It is the Blood of Jesus Christ alone, that cleanses from all sin; not the blood of goats, or bullocks.
“There is someone who can deliver the lawful captive; someone mightier than the devil.
“There is Someone who can transform one from darkness into light.
The wall that was separating you from God, had been broken down by Jesus Christ.
“As many as believe in Jesus Christ, to them gave He Power to be called sons of God.
“If any man be in Christ, he is a new creature: old things are passed away; behold, all things are become new.
“If you surrender to God; you can resist the devil and he will flee from you.
If you believe in the Lord Jesus Christ, and you call on His name, you shall be saved!”
Pastor Adeboye concluded that everyone has a choice to remain a slave to Satan (kept in his dungeon) or to surrender their life to Jesus Christ and be lifted out of darkness into light; out of captivity into freedom, out of slavery into sonhood.
Hundreds responded to the alter call for salvation in the two auditoriums of the church at the Redemption Camp.
The night was devoted to prayers for people looking for the fruit of the womb and those who needed their efforts in life to be blessed with fruitfulness.
The month before, several thousands of women who had been blessed with children after years of barrenness had taken their children to the service for blessing.
So, the September service was a great attraction to many people, who must also have been further encouraged by testimonies of couples who had been blessed with babies.

Abraham and Sarah
Appropriately, the passage for the night’s sermon, which was transcribed by the Discovery Media Crew, was the story of Abraham and Sarah, who were blessed with a son in old age.
Pastor Adeboye noted that everybody desires to move higher in life but everyone is in one kind of hole or another and desires to be lifted out of there into Glory.
He explained that there are material holes of poverty; social holes of sadness and depression, marital holes;,physical holes of disease and spiritual holes of bondage.
“There are people in multiple holes; they are sick, poor, lonely and in bondage,” he added.
But he said “there is no depth the hand of God cannot reach when we cry out to Him to lift us from the holes we are in. Many people try to climb out their holes and fall back in but the everlasting hand of God never fails.”
He, however, advised that when God has promised to lift a person out of a hole he or she should never try to figure out God with your brain. “When He decides to do something, He does it – in His own way.”
He gave an example of an artisan whose life turned around overnight.
He said: “When I moved to the University of Ilorin from Lagos, some years ago, the residence they gave me had some electrical problems, so one of my sons came over to help me fix them.
“When he finished, I asked for the cost of labour but he declined to take money, wishing instead for me to pray for him and give him transport fare to Lagos.
“I told him: ‘My son, you don’t need prayers because you’ve done this for me, may God bless you.’
“I gave him the money for transport back. Two weeks later when I went to Lagos, my son was riding a brand-new car he had bought. How did it happen? After that ‘God bless you’ he returned to Lagos and as he was coming down from the bus, he saw a classmate that he had not seen for years. They exchanged greetings, after which his friend told him he was worked at the headquarters of the military. That day he met a helper who gave him a contract later for electrical jobs and his life changed.”
Concluding the sermon, the General Overseer said when God intervenes, no matter how bad a person’s situation is, he will shine.
He advised: “But when we cry to God to lift us out of the hole and He arrives, we should hearken to what He tells us to do. We must pay attention to His instructions on how to get out of the hole, and when we come out, we must testify.”
At the end of the sermon, pastors of the church laid hands on members of the congregation. That is usually a special moment for them.
. Photographs: Según Komolafe. 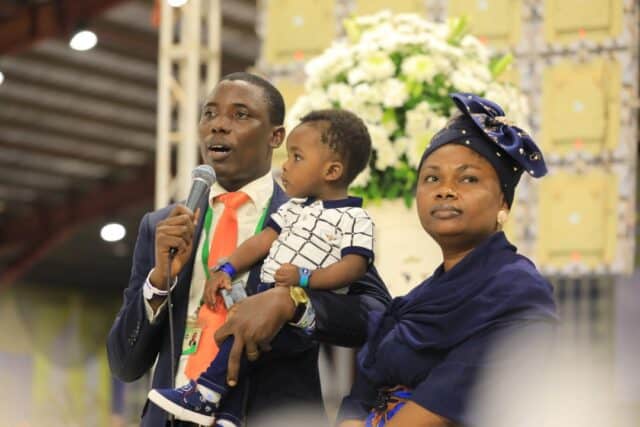 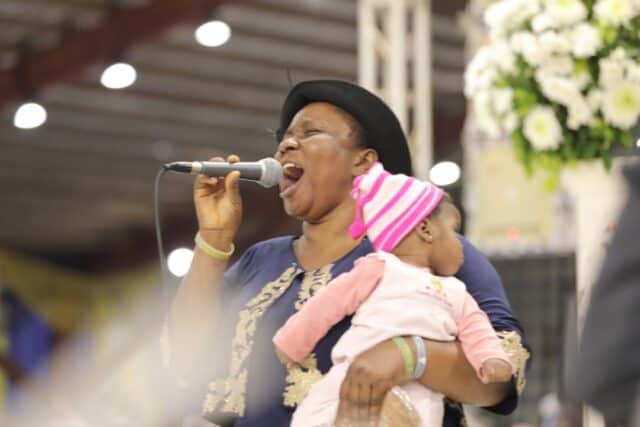 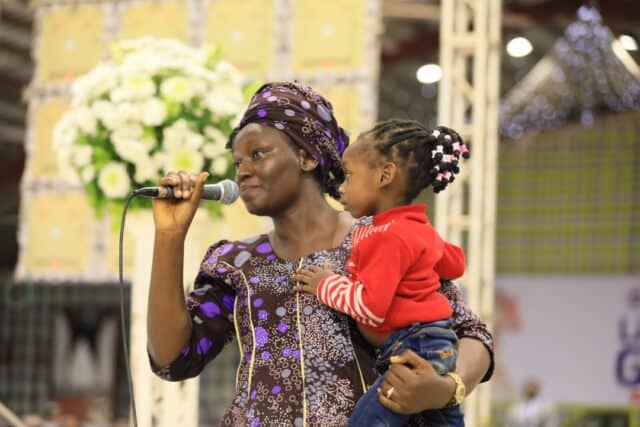 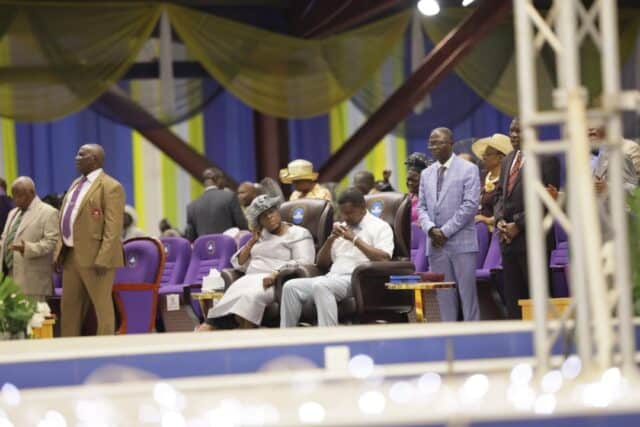 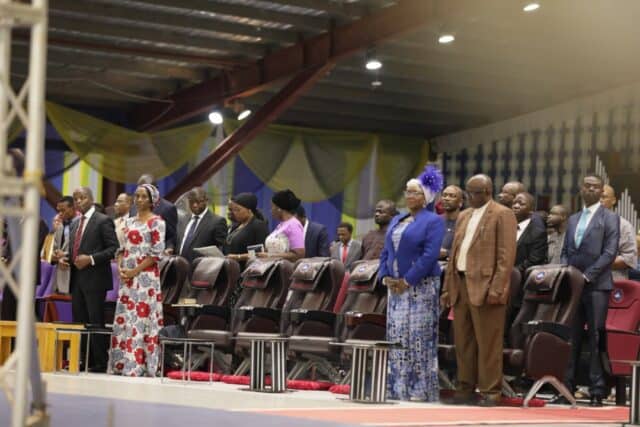 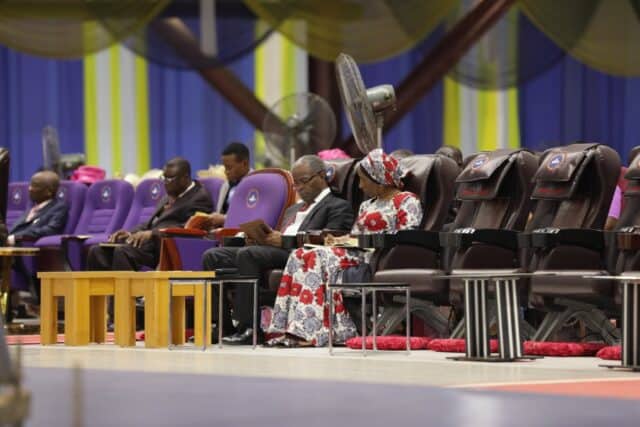 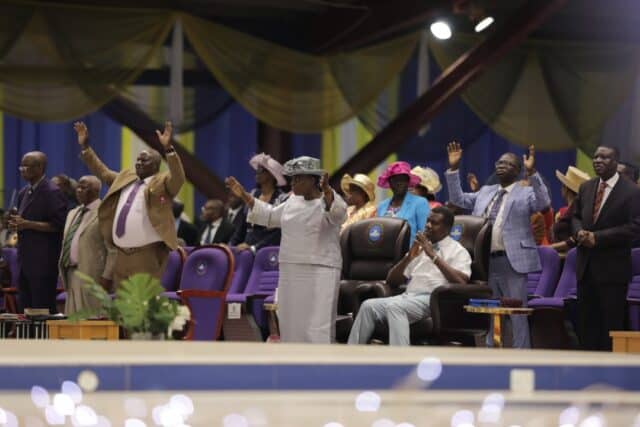 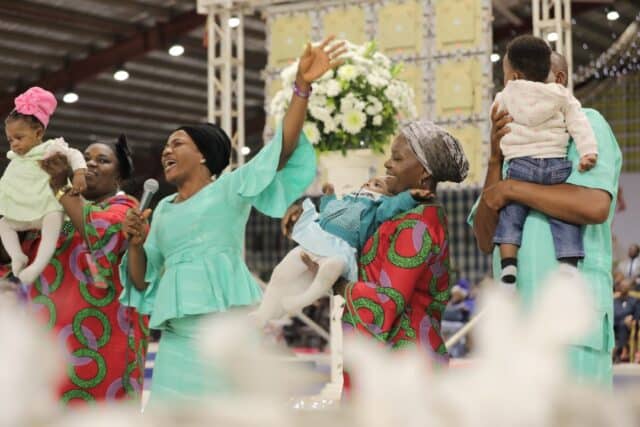