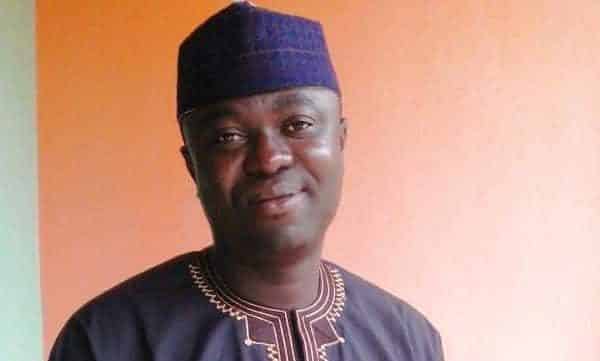 Just when Nigerians thought no lawyer will step out to defend notorious billionaire kidnapper, Chukwudumeme Onwuamadike, aka Evans, Voice Olukoya Ogungbeje has proven an exception.
Ogungbeje, who heads Lawflex Chambers and is the Chairman of Voice Vanguard, stepped out on Wednesday.
He grabbed the headlines as he filed a fundamental rights suit on behalf of Evans by dragging the Inspector General of Police, Ibrahim Idris, and three others before a Federal High Court in Lagos, alleging illegal detention.
Joined as respondents are the Nigeria Police Force; the Commissioner of Police Lagos State, Fatai Owoseni; and the Special Anti-Robbery Squad, Lagos State Police Command.
In his fundamental rights suit, the confessed kidnapper is seeking a court order directing the respondents to immediately charge him to court if there is any case against him.
He is in the alternative seeking an order compelling the respondents to immediately release him unconditionally in the absence of any offence warranting a charged.
In the suit, marked FHC/L/CS/1012/2017, Evans is contending that his continued detention by the respondents since June 10, without a charge or release on bail is an infringement on his fundamental rights.
He argued that the respondents ought to have charged him to court in accordance with the provisions of Sections 35 and 36 of the Constitution.
It was further argued that the alleged offence committed by the applicant (Evans) are correspondingly intertwined with the constitutional safeguards as provided under Sections 35 and 36 of the Constitution.
In a 27-paragraph affidavit in support of the motion deposed to by Evans’ father, Stephen Onwuamadike, it was averred that the applicant has been subjected to media trial without any court’s order by the respondents.
Onwuamadike further averred that the media trial and news orchestrated by the respondents have continued to generate reactions in both print and electronic media without his son being afforded fair hearing before a court of law.
The deponent also averred that since his son’s arrest, all his family members have been denied access to him, while media practitioners have been granted unfettered access to him.
The new suit has not been assigned to any judge and no date has been fixed for the hearing.
Evans’ lawyer, who identified himself on Facebook as Voice Olukoya Ogungbeje, had been involved in controversial cases in recent times.
In April, he filed a suit asking the Federal High Court to stay proceedings on the forfeiture of $43,449,947 (about N13 billion), N23,218,000 and £27,800 (about N10.6 million) found in a flat in Ikoyi, Lagos State.
He also sought an order directing the Economic and Financial Crimes Commission to furnish the court with a report of its preliminary or final investigation on the source of the money, its owner and how the currencies got into the building.
Ogungbeje, in a motion on notice, asked the court not to order a permanent forfeiture of the money since there are claims and counter claims as to its ownership by the Rivers State Government and the National Intelligence Agency and since the Federal Government had set up the Vice President Yemi Osinbajo panel to find out the truth about the ownership of the money.
He argued: “This honourable court has the inherent jurisdiction under Section 6 (6)(b) of the Constitution to order and direct thorough investigation on the sources of the monies, their owners, the owners of the Osborne Towers where the monies were found and how they got into the building.”
The case did not get anywhere as the money was later permanently forfeited to the Federal Government.
Ogungbeje also once filed a suit in Lagos in 2014 asking for the reinstatement of Murtala Nyako as the Governor of Adamawa State.
This was after Nyako was impeached by the Adamawa State House of Assembly in July of the same year and the Speaker of the Assembly, Ahmadu Fintiri, had taken over.
Again, the case hit the rocks.
Ogungbeje claimed the Assembly’s alleged failure to serve Nyako personally with the impeachment notice violated his fundamental right to fair hearing as enshrined under Section 36 of the 1999 Constitution.
After the court heard arguments from parties and judgment date fixed, Fintiri, through his lawyer, Chief Wole Olanipekun (SAN), urged the judge not to deliver the verdict.
The former Nigerian Bar Association president prayed the court to set aside all the proceedings conducted in the suit so far because his clients were not served with the suit in accordance with the law.
According to Olanipekun, the court should strike out the entire action since the due process of law was not followed.
Olanipekun, who was also representing the House of Assembly, argued that the originating processes were not properly served on his clients.
NAN.