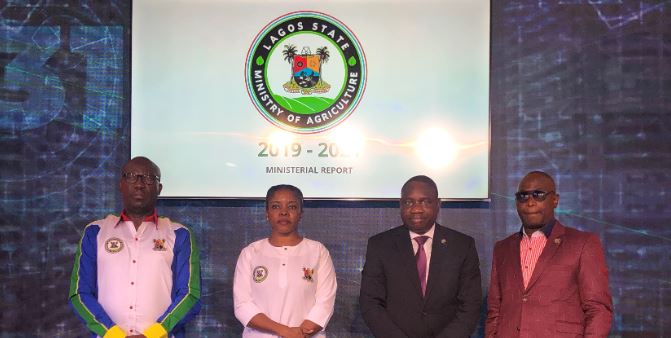 Lagos State Government says it has trained no fewer than 12,574 and empowered 19,207 youths and women in key agricultural value chains such as fisheries, poultry, rice and horticulture in two years.

The State Commissioner for Agriculture,  Abisola Olusanya who made the disclosure at a press briefing commemorating the second year in office of the administration of the Sanwo-Olu’s administration in the State explained that the training was informed by the need to encourage more youth and women participation in agriculture as well as to curb the problem of women and youth unemployment.

According to her, if the state was to succeed in her goal of attaining food security and self sufficiency status of 40% by year 2023, the need to train more youths who would readily take over from the aging farming population cannot be over emphasized.

“The administration of Babajide Sanwo-Olu is overtly committed to growing the State’s agricultural sector and ensuring that the State is less dependent on other States for the production of food. As a result of this, the State has continued with the empowerment, training and capacity development of the youth and women especially in selected key value chains such as fisheries, poultry, rice and horticulture.

“Several initiatives have been implemented where no fewer than 12,574 women and youth have been trained in the various agricultural value chains especially in fisheries, poultry, rice and horticulture. These are the areas where the State is considered to have some advantage.

“One of such initiatives is the introduction of the Eko Schools’ Agric Comic and Agric App. It is believed that this will stir up the interest of youths and teenagers in the agriculture sector,” the Commissioner averred.

She stressed that 19,207 youths and women were also empowered across all the agricultural value chains with inputs and productive assets through one of the many empowerment programmes such as the annual Agricultural Value Chains Empowerment Programme.

She noted that an additional 1,577 residents of the State similarly benefited indirectly from the Agricultural Value Chain Empowerment Programme, adding that it has also helped to increase agricultural production for wealth creation, job opportunities and livelihood sustenance towards the attainment of goals 1,2, 3, 8 and 14 of the United Nations Sustainable Development Goals.

“This is an empowerment programme that is aimed at increasing agricultural production for wealth creation, job opportunities and livelihood sustenance towards the attainment of goals 1,2, 3, 8 and 14 of the United Nations Sustainable Development Goals.

Olusanya disclosed that the state also partnered with Mastercard and the International Institute of Tropical Agriculture (IITA) to train additional 192 youth in various agricultural value chains in order to build skills and secure fulfilling work opportunities within the agriculture sector.

She stated that the collaboration was a strategic approach to agribusiness training to arouse the interest of youths and teenagers in the agricultural space to enable them make a decent living out of it.

The Commissioner noted that in same vein, no fewer than 90 youth have been trained and empowered in the cage fishing culture systems in Badagry adding that the cage culture system of fish farming was one of the ways being championed by the State Government to maximize the benefits of the abundance of water resources in the State which accounts for about 22 per cent of the state’s land mass.

Olusanya added that the cage fishing system was also an environmental friendly way of increasing fish supply in the state, increasing foreign exchange which is spent on fish importation as well as creating employment opportunities both directly and indirectly.

The Commissioner explained that the 32 Metric tonne per hour capacity integrated Rice Mill presently being constructed by the State Government at Imota in Ikorodu is the biggest in Nigeria and in West Africa and at full capacity is capable of producing approximately 2.4 million (50kg) bags of rice for the over 22 million people in Lagos State and for Nigerians as a whole.

According to her, the mill will further create employment of approximately 267,580 jobs in the State at different stages of the value chain, reduce cost of rice locally, enhance food self-sufficiency and revenue generation in the state and the country at large, as well as, ensure a sustainable supply of wholesome rice at an affordable price to the people in Lagos and its environs.

She further stated that in anticipation of the completion of the Mill and to boost the farming activities of rice farmers in the State, the State Government trained and empowered 800 rice farmers with preferred high yielding Farrow 44 seeds, brand new, high quality knapsack sprayers, rain boots and farm coats as a strategic intervention.

“We also have the World-Bank-assisted Agro-Processing Productivity Enhancement and Livelihood Improvement Support (APPEALS) Project which is aimed at enhancing the productivity of small-scale farmers in the three identified value chains of Poultry, Aquaculture and Rice through Capacity building, provision of infrastructure and empowerment.

“Under the project, 8,156 farmers and SMEs had been identified and verified and have received at least one form of training in relevant areas of agribusiness with a view to enhancing their agricultural productivity and improving value addition.

“Also, 462 beneficiaries under the Women and Youth Empowerment Programme (WYEP) had been trained in agribusiness management, soft skills among others; they have been empowered to start off production. Others will equally be supported before the end of the year,” the Commissioner said.

Olusanya noted that another 8,988 farmers were trained through the Lagos State Agricultural Development Authority, an extension arm of the ministry that is saddled with the generation and dissemination of improved agricultural technologies to value chain actors.