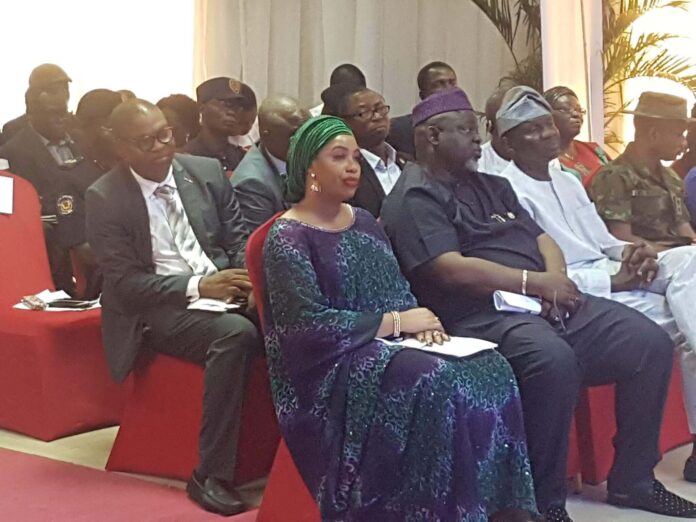 The Lagos State Government on Thursday restated it commitment to the regeneration of Lagos Island Central Business District with one week deadline to all traders and business owners for the removal of all illegal extensions on all buildings within the Lagos Island Central Business District.
Governor Babajide Sanwo-Olu, who handed down this directive at an inter-ministerial stakeholders meeting at the Onikan Youth Centre, said this was necessary as government intends before year end to begin massive renewal of the Lagos Island CBD, arguably Nigeria’s foremost commercial nerve centre.
Sanwo-Olu, who was represented by the Commissioner for Physical Planning and Urban Development, Dr. Idris Salako said it is unacceptable that despite its centrality and importance in the nation’s economy, Lagos Island remains categorised as a slum area due largely to the inordinate planning and other challenges arising from the attitudinal disposition of the people.
Sanwo-Olu said the stakeholders summit was called to help find solution to the rising cases of fire incidents, environmental degradation, street trading, traffic control and insecurity of the CBD.
He said: “The Lagos State Government has an approved regeneration masterplan for the entire Lagos Island CBD, and government is determined to ensure strict compliance with the plan, which is aimed at ensuring the development of a clean, safe and vibrant economy.”
Sanwo-Olu, who addressed a huge session made up of traditional leaders of Isale Eko, led by the Obanikoro of Lagos; Iyaloja-General of Nigeria, Chief Folashade Tinubu-Ojo; captains of industries; and top government functionaries in the built environment, called for continued partnership with the organised private sector in order to ensure the provision of facilities that will be able to sustain the huge economic size of the markets in the CBD.
The Governor insisted that government cannot afford to have the CBD to continue to be regarded as the most unsafe, reckless part of the state due to the activities of a few.
He therefore charged all residents of the Island CBD, land owning families, and especially property developers, to continue to work hard and strictly comply with all physical development laws of the state in order to move away from the culture of illegalities and make the state safe.
In her remarks, the Chairman Lagos State House of Assembly Committee on CBD, Hon. Mojisola Ali Macaulay, described the Lagos Island CBD as locus claricus, which requires serious attention and financial commitment from the public and private sector.
Macaulay said: “We all must respect the state where we are domiciled, whether for business or otherwise and ensure strict compliance with its laws.
“Disasters, which occur as a result of none compliance with laid down regulations, are becoming too rampant and there is need for all stakeholders to join hands together and make the CBD work.”
The Special Adviser to the Governor on CBD, Olugbenga Oyerinde, said Sanwo-Olu is committed to make the CBDs work.
Oyerinde said: “This government is committed to ensuring that the glory of the Lagos Island CBD is returned and people would see a new CBD in which they would be proud.”
Oyerinde, who resumed office barely a month ago, said the CBD office decided to organise the inter-ministerial stakeholders engagement in response to the spate of fire incidents in the area in recent times as well as rising spate of environmental degradation, street trading and security challenges.
He said: “Towards the end of last year 2019, the CBD witnessed series of preventable fire outbreaks.
“Coupled with these fire outbreaks are environmental and traffic infringements, which necessitated stakeholders meeting to deliberate traffic and waste management, adherence to physical planning laws, security issues, street trading and other salient issues relating to the smooth operations and development of the Lagos Island Business District.”
Oyerinde said the CBD will embark on the enumeration of all shops and houses within the district, as well as update the statistical data of stakeholders operating within the CBD to enable the government plan adequately for the needs within the district.
According to the Special Adviser, the enumeration of shops and houses will help the CBD with a land size of 8.7km to expand the infrastructure base to cater for the huge influx of millions of people coming to the Lagos Island daily.
Simon Gusah, the Team Lead, Future Cities Nigeria, a UK-sponsored organisation partnering with Lagos State Urban Renewal Agency, said the agency is working at how the people can deploy technology to reduce the stress and live smarter.
Gusah said: “We are asking the questions whether we could develop the right app that could make people to buy goods from markets at any of the 11 markets on the district without having to physically come to the Island.
“If we can achieve this and reduce the five million population of people trying to trade in the market by half a million, we may start witnessing a massive reduction in the stress level.”
He said the fact that there are app-based companies achieving this, means this is possible if given the right push.
He urged the government to adopt the four-P initiative, which is an acronym of Public, Private, People’s Partnership, thereby strengthening a massive buy-in of the people.
Tinubu-Ojo, who praised the initiative, pledged the commitment and support of all traders in Lagos Island to a cleaner environment, adding that the traders are also waging a relentless war against street trading in the state.