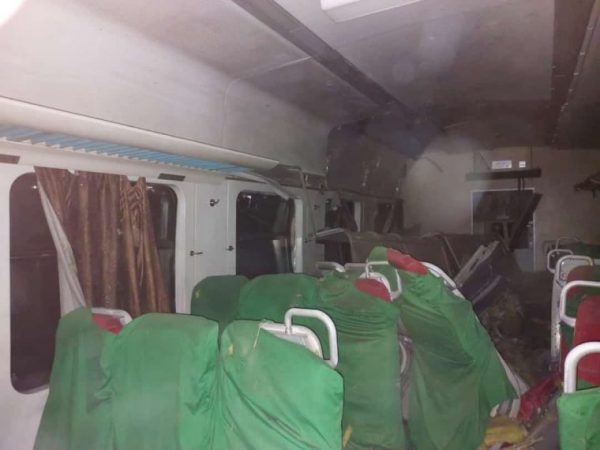 Following the attack on the Kaduna-bound train from Abuja on Monday, angry Nigerians have taken to their social media to talk about the impunity of the terrorists, insisting that some powerful personalities are assisting the group.

The Nigerians reacted to the attack on the train, which left many dead, injured and kidnapped, via social media.

One of them, Ay Nana @AyNana24, recalled: “My husband was kidnapped in 2020, it took N10million to secure his release after a few weeks with them. He said there was a very bright young man amongst the kidnappers whom they called Dan Makaranta. It means schoolboy. He spoke good English and did all their negotiations. They are not alone, they have helpers. He is a Fulani guy, and another young Yoruba guy was amongst them as well, but Dan Makaranta did all the phone calls. He said the main kidnappers didn’t know jack. They succeed in their operations with the help of informants and some educated men.”

Another Nigerian, Big [email protected], responding to @AyNana24, said: “My friend that was kidnapped in 2020 along Ilesha-Akure Road said the boys (who were just between 22 and 24) usually received SHOPRITE bread, rice, and other stuff from a certain motorcycle guy who brought it into the various locations they were. The boys were Nigerien and Malian Fulanis.  These boys were brought in for political purposes and when they were no longer needed, they decided to move on to other things. According to them, the ammunition they had was bought for them by politicians.”

The Public [email protected], also has something to say about the issue.

He said: “There’re some powerful people behind the thriving kidnapping business. Unfortunately, the law enforcers are either incapable of gathering Intel or some bad elements among them are working with the criminals. Evans, the kidnapper, said the entire proceeds did not belong to him.”

KentroVisuals @KentroVisuals opined: “They are all in the government, US and UAE have released names of sponsors, yet what did the government do about it? Arms and ammunition need to be legalised in this country to clear insecurity.”

[email protected], replying @AyNana24, said: “My parents were also kidnapped by 10 Fulani men in the same year, and they said the same thing. The leader of the kidnappers spoke very fluently, and he was the chief negotiator. Also, I believe these people have people in high places sponsoring them.”