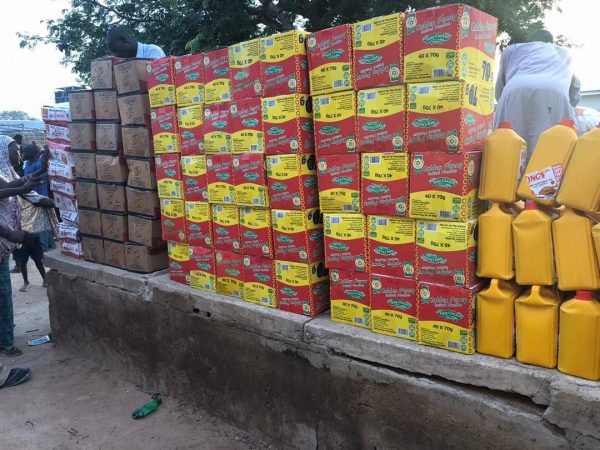 The Internally Displaced  Persons  at the camp in Yola,  Adamawa  State took turns to offer prayers  for former  Vice President,  Alhaji Atiku Abubakar, after the Atiku Care  Foundation stormed their camp with assorted  items,  worth  millions of Naira.
A statement signed by the spokesman of the foundation’s Chairman,  Ambassador  Aliyu Ibn Abbas,  Okpani Jacob Onjewu Dickson, made available to newsmen in Kaduna on Wednesday July 4, 2018, informed that the items were presented on Tuesday,  July  3  2018.
According to the statement, the camp came alive with excitement from the IDPs and officials  on sighting the trucks  conveying the assorted  items.
The statement said: “After the donation of the gift items through the brief ceremony, the highly elated recipients took turns to offer special prayers of appreciation to God to wish His Excellency, Alhaji Atiku Abubakar (GCON), the Wazirin Adamawa,for more of God’s blessing, sound health and grace in life.”
It further said that the few of the persons who spoke at the brief ceremony, praised Atiku’s consistent show of affection and love for the less privileged and the vulnerable.
It stated: “The weather, logistics, cooperation and ambience was heartwarming.”
All the Atiku Care Foundation Northeast states chapter chairmen were on ground as well as several members, to give moral support.
The officials and inhabitants of the IDP camp welcomed the ACF delegation with great joy and appreciation.
Items distributed included bags of rice, gallons of oil, toiletries, noodles, Semovita, and detergents.
The foundation will in the same spirit, storm the IDP camp in Zamfara for a similar assignment on Thursday.