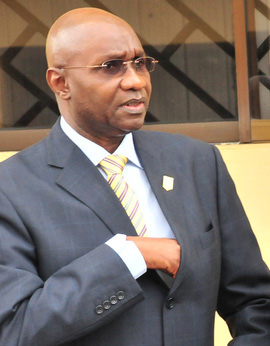 The Institute of Chartered Accountants of Nigeria on Tuesday in Lagos inaugurated Kabir Mohammed as its 49th president.
Mohammed took over the leadership of the association from the Immediate Past President, Doyin Owolabi.
In his acceptance speech, Mohammed bemoaned the rapid decay of societal values like honesty, saying this had been a major hindrance to the progress of the nation.
He said: “We are challenged as accountants to enforce professionalism and integrity and that is why the theme for 2013/2014 is Redefining Professional Values: Upgrading the ICAN brand.
“As I set out to implement various policy initiatives embedded in the 2012 to 2017 Strategic Document, we will uphold the challenges in the institute’s membership.”
The new president of ICAN said that the council, under his leadership, would address and solve the discrimination of members who qualified through the Accounting Technician Scheme.
He said that one critical issues that had continued to confront young members of the institute was labour mobility.
He said: “Indeed, failure of past efforts at signing reciprocal relationship with some bodies of International Federation of Accountants has been an issue between ICAN and World Bank.
“I am glad to announce to you that through a twinning agreement with the Institute of Chartered Accountants in England and Wales, the hurdle will be surmounted.”
Mohammed said that under his leadership, the institute would sign a Memorandum of Understanding with one of the top 50 universities in the world to assist members who intended to pursue research in the university.
While speaking with newsmen, Owolabi urged the new president to continue the work in the spirit of teamwork.
Owolabi said: “In this institute, there is nothing like a president achieving something alone.
“Our unique point is teamwork.
“And that is what brings about speedy progress.”
The investiture and handing over ceremony was attended by past presidents of the institute and accounting experts, including Akintola Williams, the Doyen of Accountancy profession in Africa.