by The Eagle Online
in Featured, Worship
3 min read
0

How I get money to run my Ministry — TB Joshua

A female American Pastor has made a claim on YouTube about controversial Nigerian Pastor, T.B. Joshua, insisting she saw him “in Heaven” where she was taken during a vision.
Responding to a video alleging Joshua’s “powers” were demonic, Pastor Daphne Patoir shares her Heavenly experience: “On Tuesday January 2nd, 2018, I was crying out to God because I wanted to be a follower of Jesus… to serve Him with my whole heart.
and Jesus replaced me, in my body. I was conscious that my body was sitting in the chair, in our room. We were flying at the speed of lightning.”
The American – who ministers in Georgia with her husband, Raynard – explained that she saw multiple “demons” who were screaming out in fear as they seemed like “roaches” before the Holy One.
“I lost control of my body. I remembered crying and telling Jesus that I was a simple girl from a small town and that the mystery was too much for me,” she vividly described, giving details of how the experience significantly solidified her faith.
“At lightning speed, Jesus took me into a room passed the second Heaven. As we entered, I saw three gift boxes. One had my name on it, the second one was given to a pastor I know and respect and the third one was given to T.B. Joshua. I saw T.B. Joshua in Heaven receiving a huge gift box,” she remarkably revealed.
Pastor Daphne said Jesus told her to “fear not” when she pleaded that she wished to return to her body.
“I know this might sound crazy but my body wouldn’t allow me access,” she explained when she attempted to return to her body during the vision.
Thereafter, the minister reminisced how after she “saw everything He wanted to show me, my body allowed me in”.
“I fell on my knees and I wept. Hours later, I was still trembling. I felt as if electricity was flowing through my body. While this was happening, my husband was sleeping in the bed. He told me that he heard me making unusual sounds and when he tried to get up to wake me, the power of the Holy Spirit pinned him to the bed.”
Daphne concluded with her insistence that Joshua was a genuine servant of God and not using malevolent powers to hoodwink people.
“I saw T.B. Joshua in the presence of God! I fear God; I wouldn’t lie,” she concluded.
Similarly, Johan Helberg – a former officer in the Criminal Investigation Department of the South African Police Force – released a video to YouTube, entitled: “Secrets of God and Prophet TB Joshua revealed.”
In the clip, Helberg – an Afrikaaner – recounted how he was “healed” from a severe sinus problem and recurrent “stomach bleeding” after praying along with Joshua, the Founder of the Synagogue Church of All Nations, via his television channel Emmanuel TV.
“I heard on TV that T.B Joshua is a false prophet and agent of darkness,” Helberg explained. “I watched videos of T.B. Joshua exposed by his members but was not convinced with what they were saying,” he continued, adding that this prompted him to deepen his investigations.
“Thank God that today, I am at an age where I can discern for myself who is a true man of God or not. This prophet is a rare gift to the world,” he stated.
“He has the solution to many people’s problems but the devil has kept them away with lies. I pray that God will open their eyes to see and recover themselves from the deceit of satan,” he concluded, adding that his life and marriage “completely changed” after discovering Emmanuel TV four years earlier.
. Ihechukwu Njoku writes from Lagos, Nigeria. 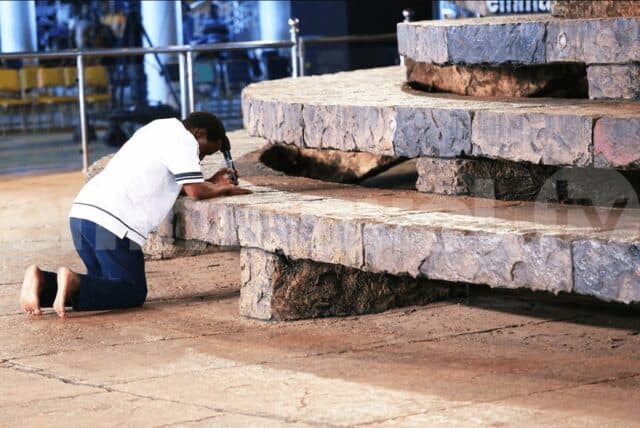 How I get money to run my Ministry — TB Joshua

Christians can be infected by COVID-19 — TB Joshua