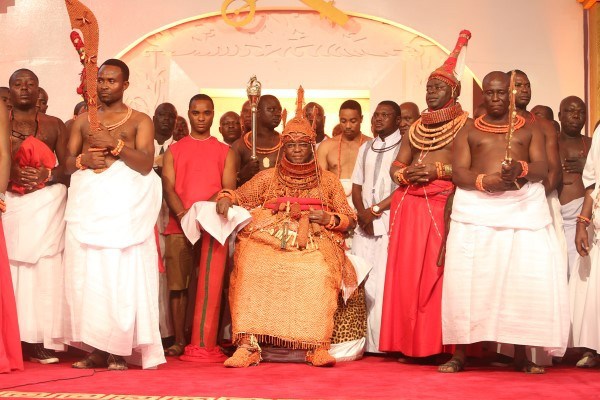 Share
Facebook Twitter LinkedIn Pinterest Email
The Oba of Benin, Oba Ewuare II, has urged the United States Agency for International Development to step into the fight against human trafficking and the rehabilitation of victims.
The Oba of Benin made the call on Tuesday when he received the United States Charge d’ Affairs, David Young, in his palace in Benin.
Oba Ewuare urged the foreign body to work out sanctions for syndicates who were involved in human trafficking as well as the receiver countries.
The monarch said there seems to be high demand for trafficked persons in Europe, hence the illegal business was thriving.
He noted that if there is no demand, there will be no supply.
He however assured the United States Charge d’ Affairs of his readiness to work with them to combat the scourge of human trafficking.
The Benin monarch solicited for grant to Oba Ewuare II Foundation to enable it rehabilitate the victims of human trafficking.
The Oba of Benin thanked the United States of America for its approach to combating the scourge, which included prevention, protection and prosecution.
He said the palace has succeeded in stamping out the activities of Community Development Associations, which hitherto constituted a clog in the wheel of progress in Benin Kingdom.
The monarch called for the return of Benin artefacts which were carted away by Europeans to enable the kingdom use them to establish a palace museum.
He urged the United States Charge d’Affairs to contribute towards its realisation.
Speaking earlier, Young said they were in the palace to appreciate His Royal Majesty for his pronouncement against illegal migration and human trafficking.
He described human trafficking as the most horrific human right violation all over the world.
He pointed out that the Omo N’Oba’s pronouncement have had great impact in bringing freedom to the victims.
Young sought the advice of the Oba of Benin on what could be done together to combat human trafficking, pointing out that the American government is ready to support in any way possible.
He explained that those who perpetrate the crime must be brought to justice.
He said the American government had already adopted an approach of prevention, protection and prosecution in the fight against human trafficking.
David Young human trafficking Oba Ewuare III United States Agency for International Development
Share. Facebook Twitter Pinterest LinkedIn Tumblr Telegram Email