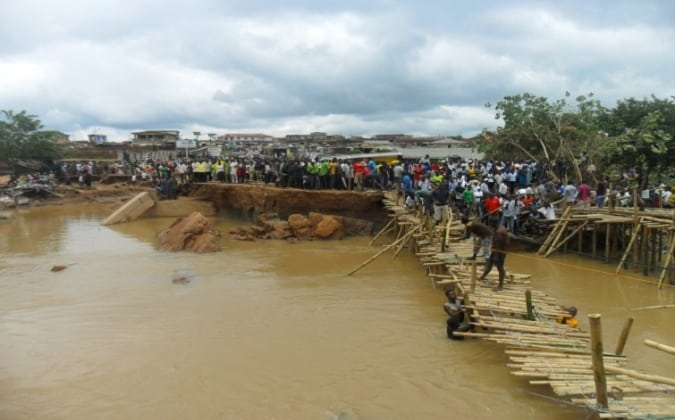 The Oyo State Government has warned residents to adhere strictly to environmental and physical planning regulations aimed at averting flood disasters in the state.
Chief Isaac Ishola, the State Commissioner for Environment and Water Resources, gave the warning on Tuesday in Ibadan after inspecting the damage caused by an early morning downpour in which properties and public utilities were destroyed.
The News Agency of Nigeria reports that worst hit in the state capital were flood-prone areas such as Apete, Ajibode and Orogun as well as other areas in the metropolis such as Old Bodija, Ashi and Akobo.
NAN also reports that many residents in flood-prone areas fled to safety as water levels rose, threatening to submerge them in their homes.
The commissioner, however, told newsmen in Ibadan that the damage recorded was as a result of negligence by residents.
Ishola stated that the ministry’s team had visited seven areas affected across the metropolis and was happy that no life was lost.
He said that residents still dump refuse in drains and build houses around water ways in spite of the several warnings from government.
He said: “The state government under the leadership of Governor Abiola Ajimobi approved the dredging of 14 rivers and streams in 2016 to avert flooding.
“We also cleared big drains. This action accounted for a flood-free year in 2016.”
Ishola said that the state had secured the approval of the World Bank on 36 out the 48 rivers identified for dredging in the state, adding that work had commenced immediately.
He said that 14 rivers were also identified for expansion out of which contract for four had been awarded while the remaining 10 were at design stage.
The commissioner, who said that government would continue to take proactive measures against flooding, urged residents to adhere strictly to environmental laws.
NAN.