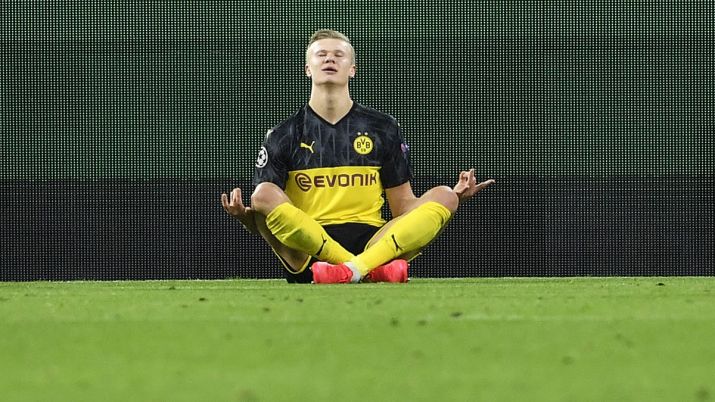 Borussia Dortmund have temporarily cut the gap to leaders Bayern Munich to six points, just a week before their clash at the Allianz Arena.

The Bavarians, however, still have a trip to Arminia Bielefeld on Sunday.

Cologne also had no trouble in beating Borussia Mönchengladbach 3-1 after a brilliant first half to go on to win the Rhine derby.

“I am happy with the game. Nevertheless, I am still looking forward to the egg hunt with the family,” the 17-year-old defender said.

Axel Witsel followed, sending the ball past goalkeeper Koen Casteels after a Haaland assist in the 26th minute.

Manuel Akanji stretched his leg to complete a Marco Reus free-kick in the 28th minute.

Emre Can then had plenty of space to run before hitting the net from outside the penalty box and Haaland got his first goal before the break.

The Norwegian sealed the spectacular win in the second half after a lovely team effort, while Ridle Baku got the hopeless Wolfsburg side a late consolation goal.

“We had a good feeling before the game, today everything was just right. Having scored six goals, Easter is a good time to celebrate at home,” coach Marco Rose said.

Wolfsburg coach Florian Kohfeldt said his side had a “desolate performance in all aspects” in the first half.

“One hard knock was enough to throw us off course. And the problem is not new.

“We now have to concentrate on getting the two wins we still need,” he said, referring to the points Wolfsburg, currently 13th, need to secure themselves in the Bundesliga.

Anthony Modeste wasted no time and broke the deadlock for Cologne with a stunning first-time finish with five minutes played.

Florian Kainz added a second in the 20th minute, and Dejan Ljubicic gave the visitors a good advantage before the break.

Gladbach returned in better shape for the second half, but only managed to hit the net in the 85th minute through Breel Embolo.

Currently sixth with 46 points, Cologne are five behind RB Leipzig, who are the first team in the qualification zone for the UEFA Champions League and visit Bayer Leverkusen on Sunday.

Lukas Kübler scored an early goal to give Freiburg the lead and Roland Sallai secured the win with a brace.

“That was essential, 90 minutes of fight,” Hertha Berlin coach Felix Magath said after the “emotional victory.”

Hertha Berlin bounced back from the derby defeat to Union Berlin with a 1-0 triumph over Augsburg.

The capital team took some important three points and left the relegation zone, as they were helped by VfB Stuttgart’s goalless draw at Mainz.

Stuttgart are now 16th in the relegation playoff spot.