Anambra State-based heavyweight boxer, Timothy “Nsiefinagaije” Gonze, has boasted that everyone will enjoy his fight at GOtv Boxing Night 22 except his opponent, Segun “Success” Olanrewaju.

Gonze, who is scheduled to make his bow at GOtv Boxing Night on April 2, said he is delighted to be part of the event for the first time and ready to show the national, sub-regional and continental boxing audiences what he can do. 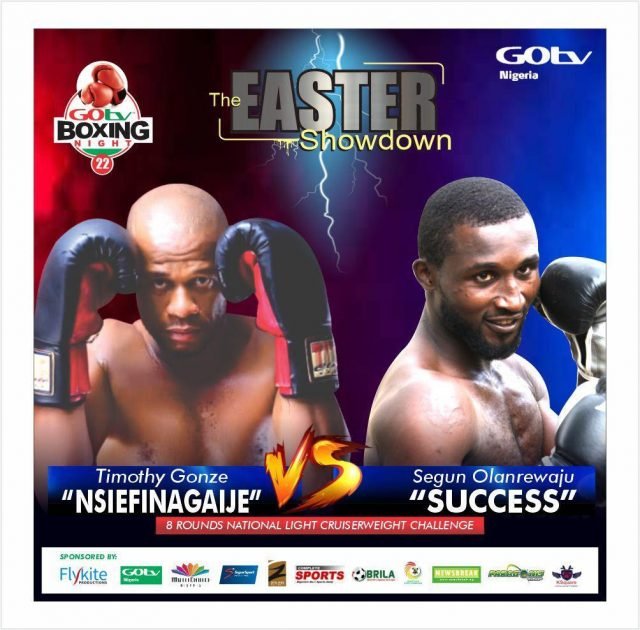 Speaking from his base on Thursday, the boxer said his opponent will not last the distance.

He said: “Olanrewaju is a good boxer, but I’m better.

“He will not last the distance.

“That fight will be enjoyed by everyone who watches it except my opponent, who will be in pains for the few rounds he will last.”

Gonze, who has had two previous fights, winning both by technical knockout, said he is particularly thrilled at being chosen to fight at GOtv Boxing Night.

He said: “It is important to thank the sponsors, GOtv, and organisers, Flykite Productions, for making this possible.

“It shows that they cast their nets far and wide to provide Nigerian boxers with opportunity and exposure.

“I intend to seize this chance with both hands and make it count.”

Flykite Productions, organisers of GOtv Boxing Night, have announced that a total of 150 fans will be allowed at the event scheduled to hold at the Mobolaji Johnson Indoor Sports Hall of the Rowe Park Sports Hall in Lagos.

This decision to allow a limited number of fans is in line with COVID-19 safety protocols.

The event will also be broadcast live on DStv channel 209 and GOtv channel 34.

La Liga, Serie A, others on DStv, GOtv this weekend

La Liga, Serie A games to watch on DStv, GOtv this weekend

NCC Board Chairman loses daughter, Commission commiserates with him