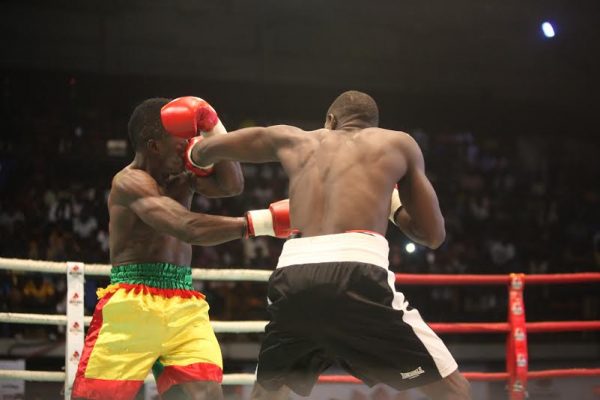 A total number of 20 GOtv decoders will be won by fans attending GOtv Boxing Night 19 on Sunday at the National Stadium, Lagos.
The decoders will be won through lucky dips to be held between the nine bouts scheduled for the event.
Jenkins Alumona, the CEO of Flykite Productions, organisers of the event, stated that the giveaway is a gesture by the sponsors to appreciate the support fans continue to give the event.
“This is the 19th edition of GOtv Boxing Night and this event couldn’t have continued for such a long time without the support of the fans. The sponsors appreciate the fans for their dedicated support over the years,” Alumona said.
Meanwhile, Eden “Lion Heart” Biki, the Ghanaian welterweight boxer billed to fight Nigeria’s Rilwan “Baby Face” Babatunde, has arrived in Nigeria from his country.
Biki, who is highly rated in West Africa, arrived on Thursday ahead of the international welterweight challenge bout at GOtv Boxing Night 19 on Sunday.
Speaking at his hotel, Biki said he is excited to be in Nigeria, but vowed to leave Baby Face and his fans disappointed, as he has come to inflict on his opponent the first defeat of his career.
“I’m aware he is the West African Boxing Union (WABU) champion and has remained undefeated as a professional. That will end on Sunday, as he will be defeated. It will be a tough fight. You should expect that because Nigeria and Ghana are great rivals in everything. But we are better and I will show that we are. Tell Baby Face that defeat awaits him on Sunday,” said Biki.
The Ghanaian boxer disclosed that he has seen many of his opponent’s fights, something that puts him at an advantage over Baby Face.
“GOtv Boxing Night is widely watched in Ghana. I have also seen his clips online. He is good, but I’m better and I have the advantage of knowing his strengths and weaknesses, while he knows nothing about me,” he revealed with barely disguised satisfaction.
A total of nine fights, including two all-female contests, are scheduled for GOtv Boxing Night 19, which will have on parade the biggest names on the domestic boxing scene. Among these are Oto “Joe Boy” Joseph, African Boxing Union (ABU) lightweight champion; Rilwan “Real One” Oladosu, WABU lightweight champion; Waidi “Skoro” Usman, former ABU featherweight champion; and Taiwo “Esepo” Agbaje.
Others are Isaac “I-Star” Chukwudi, Tope “TP Rock” Musa, Kazeem “The Light” Oliwo and Hammed “Ese Hammed” Ganiyu. The female bouts will see Rodiat Yusuf against Rodiat Ibrahim and Adedeji Abiodun facing Cynthia Ogunsemilore.
The best boxer at the event will go home with a cash prize of N1 million.