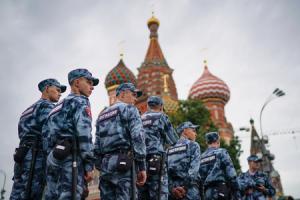 Police from 33 countries are gathering under one roof for the World Cup as Russia prepares to deal with potential issues ranging from hooliganism and terrorism to backlashes against local laws restricting LGBT rights.
Police representatives from all 32 competing countries – plus 2022 host Qatar – will gather in a police academy on the edge of the forest outside Moscow to share intelligence and spot troublemakers in World Cup crowds.
At the centre, opened yesterday by Russian interior minister Vladimir Kolokoltsev, they will walk up a red carpet to the entrance, past a table football game and a large plastic model of World Cup mascot Zabivaka the wolf, before sitting at desks arranged by each World Cup group.
“Our task is to respond quickly, correctly and according to the law” when trouble occurs,” Kolokoltsev said.
The senior British officer working at the tournament, Chief Inspector Joseph Stokoe, is taking part amid diplomatic tension after Britain accused Russia of using a nerve agent in the attempted assassin-ation of former spy Sergei Skripal and his daughter Yulia in Salisbury in March, which Moscow denies.
Stokoe said the aim is to “take politics out of policing”. He recommended that visiting LGBT fans follow local laws which restrict how they can express their identity in public. Russian law bans the so-called “propaganda” of homosexuality in any setting where children could be present. In practice, it has been used to restrict public discussion of lesbian, gay, bisexual and transgender issues and to block protests, although Russian authorities have suggested the measure will not be as strictly enforced at the World Cup.
Asked what advice he would give to LGBT fans following the England team, Stokoe predicted “they will follow the law as it is in Russia”.
The scenario of fans flying the rainbow flag has been raised with local authorities, Stokoe said, “to ensure there’s communication between the Russian authorities and us around the right behaviour and hopefully ensure the police can deal with any issues that do come up around LGBT fans who may feel they’re suffering any discrimination”.
Hooliganism has been an issue at previous tournaments, and British police are hoping to help ensure exuberant fans are not mistaken for hooligans following clashes between Russia and England supporters at the 2016 European Championship in France.
“I know how excitable and how much English fans can enjoy the occasion, drinking and singing, waving the flags,” he said.
“I know I need to try and explain to my Russian colleagues that that isn’t a precursor to anything more than England fans enjoying themselves when they go to the match.”