Evidence emerged to contradict the claim by the Christian Association of Nigeria that the man who failed in his bid to bomb the Living Faith Church in Sabo, Kaduna was a Muslim and not a Christian.
The man identified himself during an interview with newsmen at the headquarters of the Kaduna State Police Command as Nathaniel Samuel.
However, the Chairman of the CAN in Kaduna State, Rev. John Hayab, said it was after the suicide bomber left the vicinity of the church that he changed his name from Nathaniel Samuel to Mohammed Sani.
Hayab, in an interview with The PUNCH, said: “The church was in session when the young man came in, dropped his bag and exited as if he was going to the toilet, but didn’t come back in time.
“Some church members became suspicious.
“The church had put security measures in place such that they monitor everything going on in the church and they even have CCTV cameras.
“They discovered that what was in the bag looked like explosives, so they called the police.
“Let me state clearly that it was not the police that arrested him.
“It was the church that arrested him and then handed him over to the police.
“The police came to pick him up at the church.
“At the time he was interrogated at the church, he told the church that his name was Mohammed Sani, but when he was handed over to the police, the police told everyone that his name was Samuel Nathaniel.”
But apart from the video recording in which the failed suicide bomber gave his name as Nathaniel Samuel, a search on Facebook confirmed the claim.
He said at the Police Headquarters: “My name is Nathaniel Samuel.”
Nathaniel’s Facebook name is Nate Sam.
His facebook account, which was created on May 9, 2011, described him as an Event Manager and a professional Master of Ceremony.
Also confirmed as the truth was the claim by Samuel that he was a member of Living Faith Church, also known as Winners Chapel, and was looking forward to becoming a pastor.
He had a certificate showing he had attended the Believers Foundation School of the church.
He had also said at the Police Headquarters: “In fact, I am supposed to be a pastor at the Living Faith Church because I attended the Word of Faith Bible Institute.”
Nathaniel’s father, Ezekiel Samuel, also said his son had never been a Muslim for one day.
He told newsmen: “No!
“Not even for a single day has he been a Muslim.” 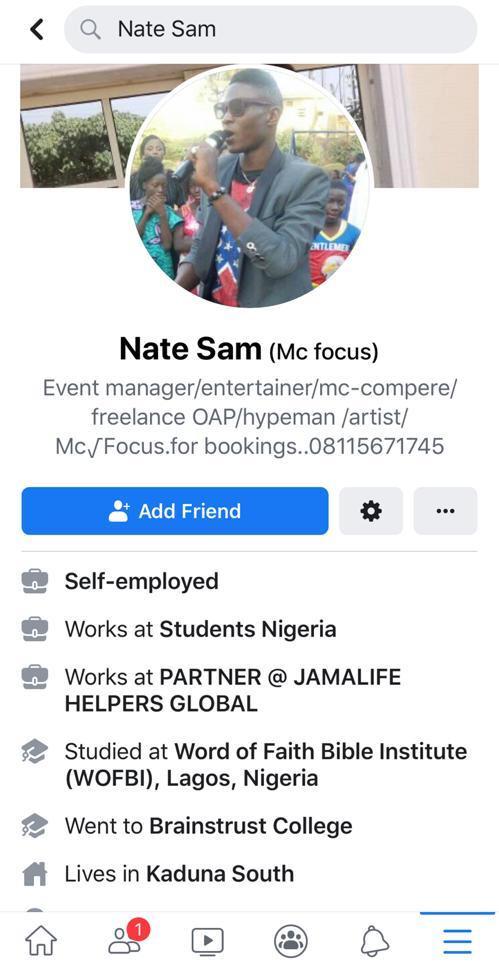 Trump’s question to Buhari: CAN sold Nigeria to US — MURIC