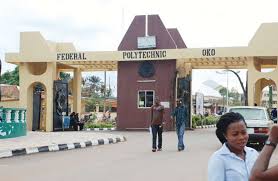 Share
Facebook Twitter LinkedIn Pinterest Email
Gully erosion measuring over 10 metres at the extension site of the Federal Polytechnic, Oko, Anambra State is now threatening about N8 billion worth of structures in the area.
This was contained in a statement by the institution’s Public Relations Officer, Obini Onuchukwu, and made available to newsmen in Awka.
Onuchukwu said the erosion was an extension of the serious Agulu/Nanka erosion site, which has become a menace to the people of the area.
He noted that the entire run-off from the institution and some parts of surrounding communities, including Amaokpala, was being emptied into the gully, which had taken over a hectare within the polytechnic.
He said it had become imperative for the Federal and Anambra State Governments, corporate bodies and wealthy individuals to intervene so as to save the structures from imminent collapse.
Obini noted that the campus extension site was where the institution was building most of its structures, including the Virtual Library, the biggest in the South East zone of the country.
According to him, other structures that could be affected are the 1,500 capacity Lecture Theatre, Engineering Building, Science Laboratory Technology Building and Entrepreneurship Development Centre.
He said others are Skills Acquisition Centre, Dr. Alex Ekwueme Resource Centre, Chinese language/Cultural Centre and Continuing Education Programme Building.
They also include Fine and Applied Art Building, Public Administration Building, Food Technology Building, PTDF building, 1,500 capacity auditorium and an office block.
The PRO expressed dismay at the continued rapid expansion of the erosion site and rued its possible devastating effects, if nothing was done urgently.
Obini said the institution had written to the Ministry of the Environment on the matter with full explanation and also designed drawing of the proposed ecological control, but yet to receive any help.
He said: “It will be heart breaking, very disheartening if all these sacrifices are allowed to be swept off by erosion, there is absolute need for all and sundry to come to the aid of the institution to salvage the situation.
“So far, the institution has sunk so much money from its Internal Generated Revenue in battling with the natural disaster.
“Huge amount of money had been spent within the gully axis to check its continuous depression that had collapsed the perimeter fencing some years back.
“So far the institution has rebuilt the collapsed perimeter fencing, built long stretch of cement road with long depth of drainage system, with catchment pits to break speed of flood within the campus.”
erosion Polytechnics
Share. Facebook Twitter Pinterest LinkedIn Tumblr Email