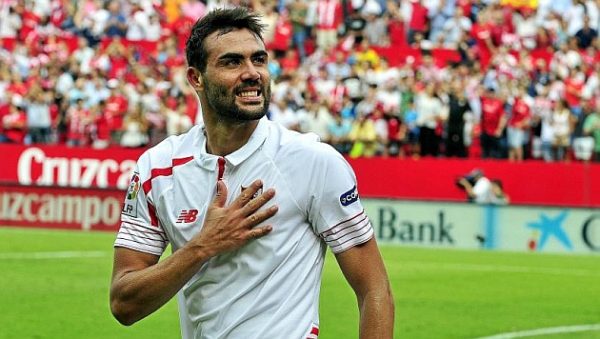 Stoke City has earned a 2-2 draw with Leicester City after twice coming from behind in the Premier League fixture at the Bet365 Stadium.
Vicente Iborra and Riyad Mahrez netted either side of half time for the Foxes, but Xherdan Shaqiri and Peter Crouch equalised for the Potters to earn a deserved point for Mark Hughes’s men.
Despite the disappointment of twice losing a lead, Leicester are now unbeaten in four trips to Stoke, while Claude Puel has four points from his first two matches in charge of the East Midlands outfit.
Both teams started tentatively at the Bet365 Stadium – which was staging the 100th competitive meeting between the clubs – and it took 14 minutes for the first shot on goal with Shaqiri dragging a low effort harmlessly wide of the post.
Just after the half-hour mark, Leicester went in front through Iborra, who reacted fastest to Maguire’s knockdown to lash a volley into the net from eight yards for his first goal in a Foxes shirt.
Leicester wasted several openings to double their lead, with Shinji Okazaki seeing a close-range header superbly kept out by Jack Butland and Iborra sending a free header over the bar from 12 yards, and the visitors were quickly made to pay.
Choupo-Moting’s flick set Shaqiri clear of the Leicester defence and after advancing into the penalty area, the Swiss winger curled the ball into the far corner via the inside of the post.
Mahrez sent a rasping shot marginally wide of the far post but just before the hour mark, Stoke should have gone ahead through Ryan Shawcross, whose 10-yard header was saved by Schmeichel low down to his right.
Less than 60 seconds had passed when Leicester regained the advantage. Mahrez was released down the right flank and after surging away from Erik Pieters, the Algerian remained patient before firing a shot into the far corner of the net from an acute angle.
Stoke needed to make a change and it saw Crouch introduced for his seventh outing from the bench in the league this season, but Hughes got his reward for using the target man as an impact substitute.
Shaqiri’s outswinging corner found the run of the veteran, who got ahead of Christian Fuchs to power a header into the near corner from 10 yards out.
Both teams continued to push men forward towards the end of the game and Stoke almost claimed a dramatic winner with the final action, but Crouch’s header was superbly kept out by Schmeichel.