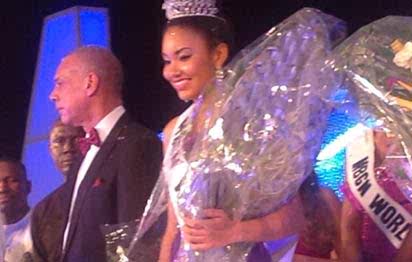 The Bayelsa State Governor, Seriake Dickson, has appointed 18-year-old Miss Anna Ebiere Banner, winner of the 2013 Most Beautiful Girl in Nigeria, as his Special Adviser on Culture and Tourism.
The Nigerian Beauty Queen, who is also Miss Bayelsa State, is billed to represent Nigeria at the world pageant show later this year in Jakarta, the Indonesian capital.
The MBGN event, which was held at the Banquet Hall of the Bayelsa State Government House in Yenagoa, the Bayelsa state capital, on Saturday was keenly contested by 32 contestants drawn from all parts of the country.
Banner defeated her closest rival, 19-year-old Miss Imo State, Stephanie Okwu, to emerge the Most Beautiful Girl in Nigeria.
Okwu emerged as the first runner up.
Others included Miss Adamawa, Lawrence Powede, who emerged second runner up, while Miss Kaduna, Enioma Agboniko, clinched the third runner up position.
Miss Imelissa Devidal, who could have given the Bayelsa State beauty a serious challenge for the coveted prize, emerged as fourth runner up due to her poor showing in the question and answer session.