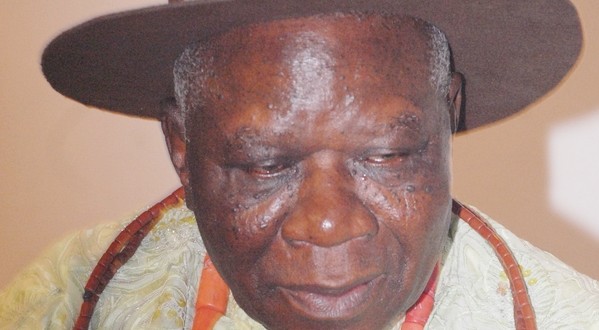 Ijaw leader and elder statesman, Edwin Kiagbodo Clark, has picked holes in the plan by President Muhammadu Buhari to establish a naval base in Kano, IN THE HEART OF THE SAHEL, saying such plan is not only “nonsensical” but represents one of the most unjust and oppressive actions of his (Buhari) government on the people of the Niger Delta.

The proposal to establish a naval base in Kano was recently announced by the Chief of Naval Staff, Rear Admiral Zubairu Gambo, an indigene of Kano.

In an Open Letter to the President, Chief Clark

Clark said since the plan was made public, especially following the donation of 100 hectares of land at Dawakin Tofa Community for the purpose by Governor Umar Ganduje, many Nigerians had expressed surprise, “especially as it is an utmost example of putting square peg in a round hole.”

“I will like to counsel you that decisions which one takes while serving the country, or in any other position, should be based on higher issues of national and human interests, and rational consideration.

“That a new Naval Base is being built in the middle of the Sahel, which is dry land, and which the entire world knows is presently under threat of fast spreading desertification, is totally ill-conceived and not in the interest of the nation.

“Such a project will be a huge waste of public funds which are freely available to one person who has taken the pride of using it to develop one part of the country at the near neglect of other parts,” he said.

He advised the president to, in the interest of Nigeria, build the naval base where it will be economically efficient and viable, and provide security for the nation’s territorial waters.

“Nigeria is dying economically and politically. Yet here we are, deploying scarce resources to embark on projects on nepotic reasons, rather than on viability.

“As President of the entire country, you will save huge resources doing the right thing and improving the economy, if objectivity and national interest are your watchwords.”

The Ijaw leader wondered: if there is need for more naval bases to be built or established in the country outside Lagos, what has happened to the coastal states, particularly in the Niger Delta area where much of the country’s shoreline exists, and needs to be protected?

He noted that there are at present no serious naval bases in such critical riverine areas such as Akwa Ibom, Bayelsa, Delta, Edo and Ondo states, stressing particularly that major coastal towns such as Koko, Sapele, Burutu and Forcados terminals in Delta have need for naval base, but there are no functional ones located in those places.

He said: “Let me remind Your Excellency, that all over the world, there is what is called needs assessment which determines what projects to be constructed and where to site them. Also, economics has what is called nearness to raw material. In a similar way, Almighty God has created Nigeria and made it possible for the development of certain areas or facilities to be in certain areas.

“I can vividly recall that when the Nigerian Navy was established in 1956, some persons, especially of Niger Delta extraction, were transferred to the Navy. Someone like Joseph Edet Akinwale Wey was amongst such persons and he in fact rose to Vice Admiral. The next person I can recall was Admiral Nelson Soroh. Later on, I served in the same cabinet with them during the Government of Gen. Yakubu Gowon.

“Bayelsa State is entirely surrounded by the Atlantic Ocean and the River Niger, yet there are no Naval Bases there to protect the shores of Nigeria and the oil companies. For instance, the Bonga Oil Field which is the largest oil field in Nigeria, is in Bayelsa State. Two riverine communities, Agae and Amatu communities, are on the bank of the Atlantic Ocean, close to the Bonga Oil Field, where oil companies are located yet there is no Naval Base to protect them. The people are left to their fate. The same condition befalls Akwa Ibom, Cross River, Edo and Ondo states.

“The question here is: how possible will it be to navigate a navy warship through the waters of Lagos to the desert Naval Base in Kano which you want to build? Or is there a waterway to take one from Lagos to Kano? Or do you want to create an artificial ocean? Or is it because you control the government that other Nigerians can be treated shabbily, as second-class citizens, without involving them in the development of the country in their area?”

Clark maintained that the siting of naval bases all over the world is mainly for provision of security along the waterways of a country in order to provide security for the nation’s internal waters and its territorial integrity. This is done where there is water and not in the heart of a dry land.

He said it is “even difficult to decipher and more curious” why the president wants to crowd the North which is already saturated with heavy military infrastructure, especially in places like Kaduna and Kano States.

“There must be a limit to nepotism and parochialism,” he said.

“When 30% of the Nigerian National Petroleum Corporation (NNPC)’s profit was allocated to frontier basin exploration in the recently passed and assented Petroleum Industry Act, some of us had anticipated such “smart” moves, and are, therefore, not surprised.

“But what I would have thought is that you would have given priority to such projects by asking the NNPC, the International Oil Companies (IOCs) and their Nigerian counterparts to move their operational headquarters to the Niger Delta, an order which is yet to be carried out despite promises upon promises.

“The implementation of this relocation order made by Mr. President through Mr. Vice President, when he acted as President, has remained adamant like a still born.  However, what is quickly organised is the building of a naval base in a part of the country where there is no water. Who knows, maybe sea vessels that can cruise on sand have been built,” he said.

The Ijaw leader also raised several other instances of projects the administration had embarked upon, which are nepotistic in nature, including approval recently for the building of 60 billion naira worth roads in Kano State, while the Minister of Niger Delta Affairs, Godswill Akpabio, is struggling to raise 20 billion naira to complete the East-West Road, “even going to the extent of using funds of the Niger Delta Development Commission (NDDC) to execute the project.

He also alluded to the pronouncement by a former Chief of Army Staff, Tukur Yusuf Buratai, that he was going to build an Army University in his home town, Biu, in Borno State.

“We thought it was a joke. But here we are. How did he get the funds? Where is the budgetary approval and provision for such a project? Was it ever budgeted for by the NASS or was it part of the money allocated to the army to purchase arms to fight insurgency that was being used to build the university?

“Mr. President, the question I am asking is who is fooling who in this country of ours? Because the announcement came at a time when the country needed money to fight Boko Haram. Today, there is an Army University functioning in Biu.

“Mr. President, are we really in one country called the Federal Republic of Nigeria where every individual ought to be equal, should know and participate in what is going on in the country?”