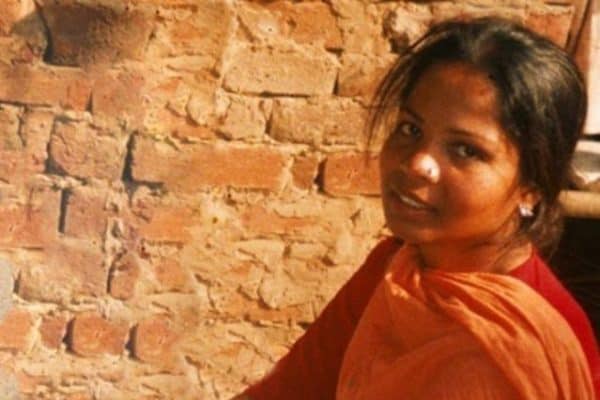 A Christian woman acquitted of blasphemy after spending eight years on death row in Pakistan has left for Canada to be reunited with her daughters, Pakistani officials and others involved in the case said Wednesday.
Aasia Bibi was convicted of blasphemy in 2009 after a quarrel with a fellow farmworker.
The Supreme Court overturned her conviction last year, and she had been in protective custody since then.
Extremists have rioted over the case and threatened to kill her.
The same radical Islamists, many of whom have been jailed for their threats, also urged the overthrow of the government following Bibi’s acquittal.
A higher court in the provincial capital Lahore upheld the sentence in 2014 under the country’s controversial blasphemy laws.
The Supreme Court suspended her death sentence in October in a judgment hailed by rights groups.
“Bibi has been reunited with her family in Canada,” Shamoon Gill, a Christian activist from All Pakistan Minorities Alliance, said.
Bibi’s family members had been living in hiding for years due to safety concerns and were moved to Canada.
After Bibi’s acquittal, her husband pleaded in November for the family’s asylum in Britain, the US or Canada.
After the Supreme Court ordered her release, activists of a hard-line Sunni group, Tehreek-e-Labbaik Pakistan, paralysed Pakistan for three days with protests.
They said that Bibi and the judges who ordered her release should be killed.
Bibi was then kept at unknown locations under tight security and her lawyer left the country for some time due to threats on their lives.
The TLP also filed an appeal against the acquittal, which the court rejected.
Authorities arrested the entire leadership of TLP in a crackdown following the unrest, diminishing the group’s power to stage protests.
The case attracted global attention and led to the killing in 2011 of then-Punjab governor Salman Taseer, who sought to reform the blasphemy laws.
Blasphemy is a sensitive topic in Pakistan and those accused can become the target of Muslim vigilante groups. In some cases, they have been gunned down, burned alive or bludgeoned to death.
dpa/NAN.