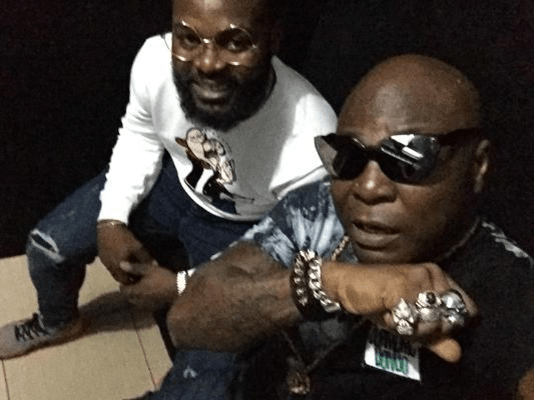 Foremost Nigerian showbiz maestro and activist, Charles Oputa, a.k.a Charlyboy, is set to release a hit single featuring ace singer and rapper Folarin Falana, popularly known as Falz.
The 68-year-old grand-father, who released his debut high-life album over three decades ago, hinted on the ‘collabo’ in an interview with the News Agency of Nigeria on Tuesday in Abuja.
The “Nwata Miss” crooner said he has decided to work with Falz because of his philosophical style of music that addresses leadership issues and societal ills.
He added that the project was an advocacy song targeted at driving positive narratives in the society.
He said: “Falz is a young man that I so much believe in his music and passion towards positive change in all aspects of our society, and we share similar thoughts.
“We are working on something together and it will sure stir positive change in our lives as Nigerians.”
The former president of Performing Musicians Association of Nigeria said that he decided to use music as a tool to inspire ordinary Nigerians, especially youths, towards holding leaders accountable.
He explained that he was leading   an advocacy and enlightenment campaign ‘Na we be Government” and decided to go back to music, his age-long passion, to call citizens to participate in nation building.
He said: “All over the word, the Arts, especially music, have been used to inspire people and change narratives towards a better society.
“I did not go into music for money, but for the passion for it, and this time I am using it to awake the consciousness of all Nigerians towards building the country they desire.
“A lot of Nigerians have given up on their country because of bad leadership over the years, and do not believe they have a say in the affairs of their country.
“It is time they are reminded that power truly belongs to them and there is a social contract between them and elected political leaders.
“Citizens will do their part and political leaders should also fulfill their obligations as promised in their manifesto, and as required by the constitution.”
The ‘Areafada’ however urged Nigerian singers to look beyond money-making and come up with projects that would propel value reorientation.