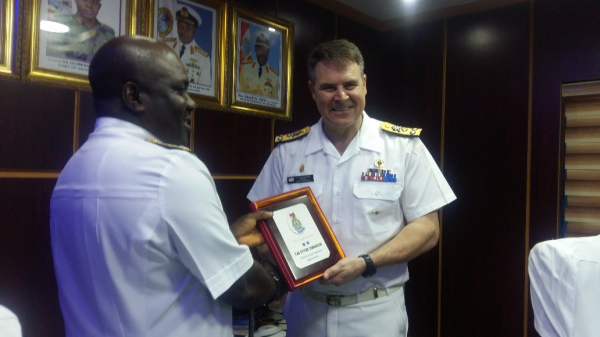 The Canadian Naval Ships, HMCS SUMMERSIDE and HMCS KINGSTON, on Friday berthed in Lagos to foster the existing bilateral relationships and boost capacity of military personnel in Nigeria.
The Commander, Royal Canadian Navy, Vice Adm. Ron Llyod, who led the Canadian Naval team, told journalists that the visit was aimed at strengthening cooperation between the two countries’ navies.
The News Agency of Nigeria reports that the Canadian Navy Ships will also participate in the maritime exercise with the Nigerian Navy, United Kingdom and United States Navy coming up later in the year.
Llyod said: “We have two Canadian ships that will be operating in the maritime exercise; so we are very grateful for the Nigerian Navy’s hospitality.”
Llyod said that he and the entire crew were very delighted to make this call to Nigeria.
He said: “We have 75 crew members in the two ships.”
Receiving the ship and its crew, Rear-Adm. Sylvanus Abbah, the Flag Officer Commanding, Western Naval Command, said that the visit showed the existing cordial bilateral relationship between Nigeria and Canada.
Abbah said he was delighted that the Canadian Navy came to Nigeria, adding that the country’s navy would also return the visit.
He said that the visit displayed one of the flag showing roles of navies worldwide, adding that friendly navies exchange visits like this.
Abbah said that the visit would further cement the existing relationship between Nigeria and Canada.