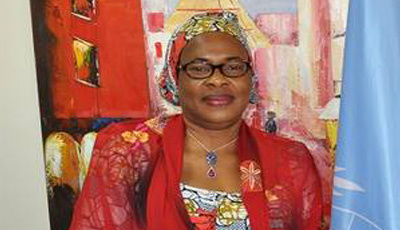 The Permanent Secretary of the Federal Ministry of the Environment, Nana Fatima Mede, has been given a one-week ultimatum to clear the grey areas that led to the cancelation of the visit of President Muhammadu Buhari to Cross River State.
The visit was for the groundbreaking ceremony of a 260km dual carriage superhighway in the state.
It was however cancelled based on the advice of Mede concerning the alleged failure of the state government to carry out the mandatory Environmental Impact Assessment of the project.
A statement by Christian Ita, the Chief Press Secretary to Governor Ben Ayade of Cross River State, said last week that the decision to postpone the ceremony was communicated to the state government in a letter signed by the Chief of Staff to the President, Abba Kyari.
The statement by Ita said: “The presidency attributed the shift to a letter written to the President by the Permanent Secretary, Federal Ministry of Environment, Nana Fatima Mede.
“She claimed that the proposed highway, if allowed to go on, would cut through the Cross River National Park.
“The letter claimed that the Environmental Impact Assessment on the proposed road was yet to be carried out.”
However, the Cross River State Government denied the allegation, saying that even Mede’s Ministry was involved in the EIA.
The state government stated that the proposed road would not traverse the Cross River National Park as the superhighway would be several kilometres away from the national park.
Ita said in the statement: “Based on the input of the Cross River National Park, the road has since been re-routed with the alignment now several kilometers away from the Park.
“As a governor who is passionate about the preservation of the state’s biodiversity with his establishment of the Green Police, he would not embark on a project that would undermine the environment.”
Ita said the EIA report on the road was being handled by PGM (Nigeria) Limited, an environmental consultant company, recommended to the state by the Federal Ministry of the Environment.
Ita said the governor would work closely with the Presidency to clear areas of doubt, adding that a new date for the ceremony would be announced later.
In clearing the areas of doubt, it was learnt that the Cross River State Government presented documented evidences to the Presidency, resulting in Mede being given the marching order to clear all areas of doubt within one week.
It was gathered that the Presidency was not happy with the political colouration the cancellation of the ceremony had generated.
While the Federal Government is led by the All Progressives Congress, the Cross River State Government was elected on the platform of the Peoples Democratic Party.
It was gathered that once Mede clears the grey areas, “the President should be in Cross River State to perform the groundbreaking ceremony within two weeks”.
When contacted, presidential spokesman, Femi Adesina, told The Eagle Online that the groundbreaking ceremony was not cancelled but postponed to clear all grey areas.
Adesina said the Presidency does not want to get caught in the issues surrounding the project, hence the decision to postpone the visit of Buhari to the state.
He said once the issues are sorted out, Buhari will be on his way to the state.
When contacted, Ita said the state government had no further comments on the issue apart from the statement it issued on Thursday clarifying its position on the EIA.