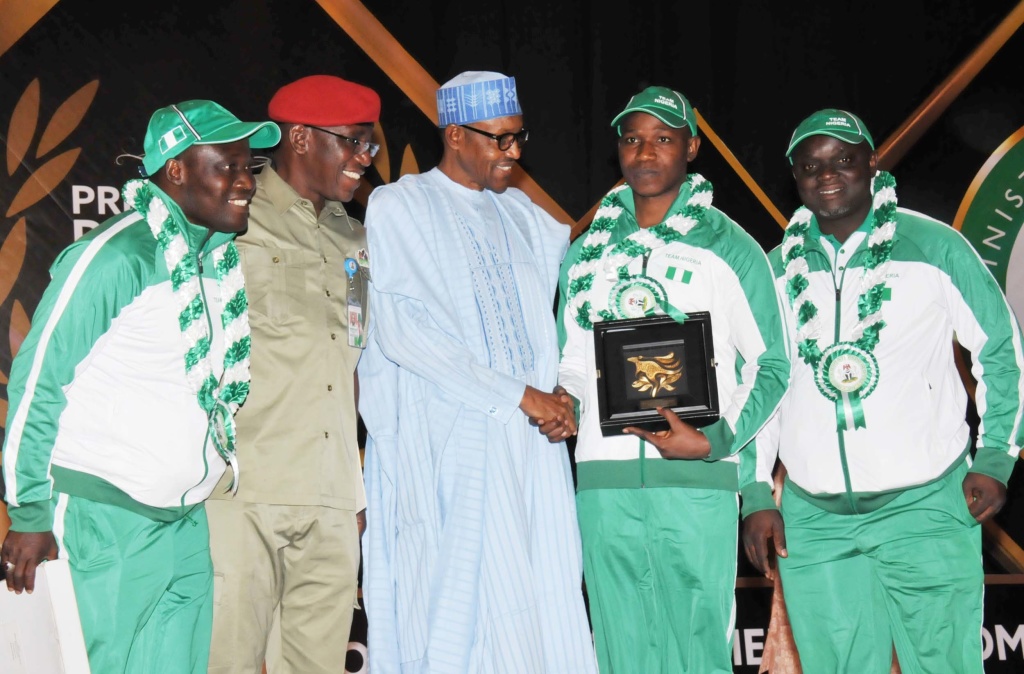 President Muhammadu Buhari on Thursday rewarded Nigerian sportsmen and women with monetary gift for distinguishing themselves and making the country proud at various continental and international tournaments.
Although the beneficiaries received the announcement with mixed feelings, the glorious Golden Eaglets that won the FIFA U-17 World Cup in 1985 and 2015 however got the highest reward with the players of both teams smiling home with N2 million and N1.2 million respectively from the President.
According to the President, while Wellington Jighere, the first African to win the English-Language World Scrabble Championships last year, smiled to the bank with N1.5 million, his coach and secretary got N1.2 million and N1 million respectively.
For making Nigeria proud by winning last year’s CAF U-23 qualifiers for the Rio 2016 Olympic Games, the President rewarded both Coach Samson Siasia and his Dream Team VI squad with N600,000 each, with the assistants and officials getting N300,000 each.
Although football players and coaches got the larger chunk of the monetary largesse, President Buhari equally extended the handshake and financial reward to the Nigeria Male Basketball team, D’Tigers, and the female junior team with N800,000 and N600,000 each respectively, just as their coaches got N400,000 each.
However, most of the beneficiaries who came with the mindset of getting something approximate to the days of the President Goodluck Jonathan administration were disappointed with the sum they got, with many either murmuring or refusing to clap while the President made the announcements.
A member of the victorious Basketball team described it as paltry, lamenting that he would not have left his base to the sum given to him.
It was a case of different case for different folks as the Captain of the triumphant U-17 Class of 1985, Coach Nduka Ugbade, described the reward as timely and helpful, stressing that it would be wrong to quantify the reward only in monetary teams.
Ugbade said: “I want to thank Mr President for finally remembering us. You can see the special greetings he gave to us when we mounted the podium for a handshake and photograph. It will be wrong to quantify this reward with only the monetary value. Our joy is that Mr President has finally fulfilled his promise.”
Speaking while delivering his speech, President Buhari charged Team Nigeria athletes, players and officials to surpass the unimpressive outing recorded at the London Olympic Games when they storm Brazil this year for the Rio Olympic Games, pledging to ensure that government provide all forms of support needed for a good outing.
Commending the sports administrators for toiling to ensure that the successes recorded were made possible, President Buhari said: “It gladdens my heart to play host to the various sportsmen and women. I want to thank the administrators in the sports sector for ensuring that we recorded these successes.
“On our own, we are government of change and in our capacity, we will do everything possible to ensure that we provide the necessary support needed for more successes. I understand that we did not do well in the last Olympics in London, we have to put everything in place to ensure that such failure did not repeat in Brazil.”
The highpoint of the reception was when President Buhari mistakenly announced a monetary reward of N200 million for the Ugbade-led Kodak Cup team, prompting the Minister of Sports and Youth Development, Solomon Dalung, mounting the podium to announce the correct figure.