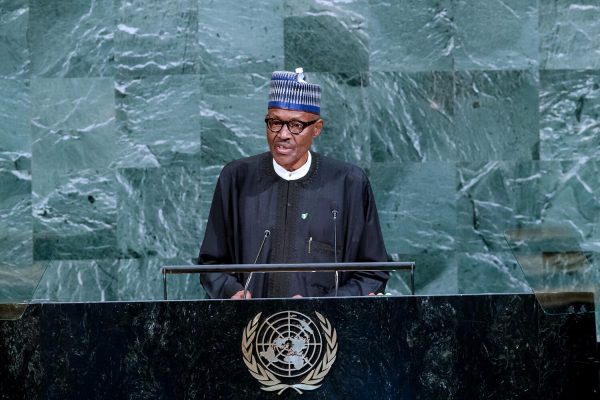 President Muhammadu Buhari on Thursday declared open the 2018 International Press Institute World Congress with a call on journalists worldwide to address the menace of fake news and hate speech.
The President, who spoke at the State House Conference Hall, Abuja, said good journalism for the good of humanity was panacea for prevalent fake news, disinformation and hate speech.
According to him, the changing media landscape, the explosion of social media and the rapidly evolving new technology have had profound impact on the media and media business.
He said: “It is satisfying, therefore, that you have chosen an appropriate theme for your conference: Why Good Journalism Matters: Quality Media for Strong Societies.
“In a world where the borderline between hate speech and free speech has become blurred, good journalism matters. In an environment where fake news dwarfs investigative reporting, Good Journalism Matters.
“For survival in an increasingly competitive field, Good Journalism Matters. Good journalism promotes Good Governance.”
The President urged participants to give depth to the topic in their discussions and conclusions.
President Buhari observed that the Institute’s annual congress was holding in Nigeria during a period of global terrorism.
According to the President, Nigeria has experienced the scourge through Boko Haram, which has been technically degraded and has no territorial hold anywhere, anymore in its North East operational base.
He said Internally Displaced Persons were gradually returning to their communities in reasonable safety and security.
Buhari said: “It is a reflection of your assessment of Nigeria as a safe country that you gave the country the hosting right for this conference.
“As you have seen since your arrival, you made a wise and right choice.
“It is the first time in the 68-year history of the media’s premier platform for press freedom that editors, media executives and leading journalists would gather in this country for its World Congress and General Assembly.
“Nigeria is most honoured to host you.”
President Buhari noted that Nigeria had a rich history of robust relationship with the IPI as prominent Nigerian journalists and media operators were and continue to be in the leadership of the international body.
He added: “But perhaps the most significant symbol of this special relationship is the Nigeria Institute of Journalism, Ogba, Ikeja in Lagos, established by IPI in 1963.
“It is our pride that your vision of a professional journalism training institution in Nigeria has taken firm root.”
The President also spoke about the introduction of visa on arrival policy, which he described as one of his administration’s reform initiatives designed to strengthen ease of doing business in Nigeria.
“I am glad that international delegates to this conference are beneficiaries of this policy,” he said.
He noted that the Nigerian Government had provided necessary support for a successful hosting right from the point of presenting its hosting bid in Qatar to the granting of that right in Germany in 2017.
He, therefore, commended the efforts of the Nigeria Hosting Committee for organising the conference, saying: “It is evidence of Nigeria’s capacity for doing great things.”