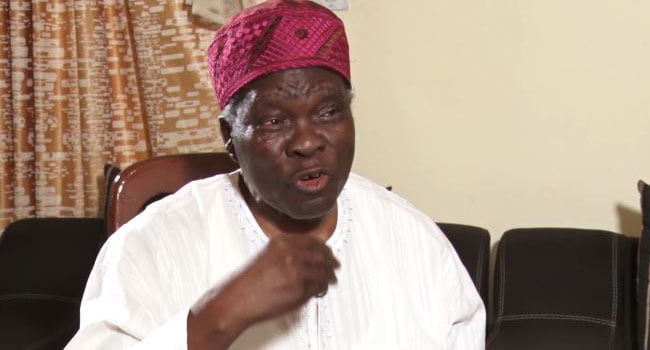 The Yoruba World Congress has sacked Emeritus Professor Banji Akintoye as its Leader.

This was contained in a statement made available to The Eagle Online on by the National Secretary of the YWC, Prof. Anthony Kila, on Sunday.

The sack of Akintoye was preceded by one week of “total silence and consultations with various Yoruba Leaders and Traditional rulers”.

This came as a result of the pronouncement of Akintoye sacking the co-founders of the YWC.

In the statement jointly signed by four of the co-founders of the worldwide organisation: Dr. Amos Akingba, Chief Tola Adeniyi, Chief Solagbade Popoola and Kila, and shared with all registered members of the YWC, Prof Akintoye was charged with gross incompetence, indecisiveness, obnoxious dictatorship and absolute disregard for laid down rules and order, lack of consistency and reliability.

The statement added: “Akintoye has one leg in the motley associations which elected him Yoruba Leader at Ibadan August 2019, another leg in Afenifere, a leading Pan-Yoruba socio-cultural political organization where he is the Chairman of that body’s Political Committee and strangely another leg in YWC where he has been decorated as Protem Leader since late 2018.

:His legendary divisiveness has created unprecedented acrimony and confusion in all the listed entities, particularly in the Europe and America chapters of the YWC.

“In order to save the soul of YWC and sustain the huge goodwill and confidence the entire Yoruba race has in our respectable organization it was resolved that retired Professor Banji Akintoye must go.”

The statement said the YWC will now be administered by Collective Leadership pending the appointment of a new leader.

The statement said: “The decision was reached after one week of turmoil and various attempts to quietly and internally solve a crisis that originated from an attempt by Akintoye and some other people to hijack the YWC Leadership structure by removing members of the Leaders Council.

“It will be recalled that on Tuesday 25th August, the YWC Leaders Council refused to sit in a meeting in which Prof Akintoye imported some 20 plus people to the YWC Leaders Council Meeting. Information gathered has now shown that many of these people are not even YWC members but those who elected Akintoye as leader in Ibadan and some other people linked by personal relationship to him.

“Since then several attempts have been made to mend fences but it has now become clear that Prof Akintoye has made up his mind to pitch his tent with those outside the YWC against the YWC.

“All attempts to make Prof Akintoye retrace his steps came to alt when it was gathered that some people had sworn to an Oath to dissolve the YWC.

“Prof Akintoye remains the Yoruba Leader as elected in Ibadan August 2019 but that position is now clearly in conflict with being the YWC Leader and it has been reviewed.”