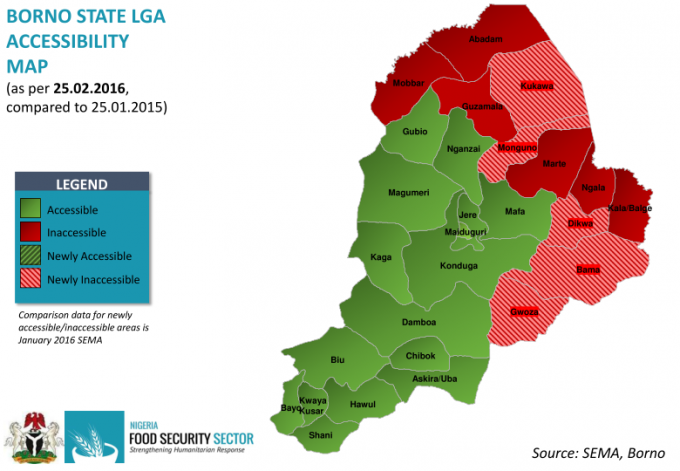 Borno Government says it has spent N14 billion on the construction of 22 roads in the past two years.
Alhaji Adamu Lawan, the Commissioner of Works, Housing and Transport, made this known at a news conference in Maiduguri.
Lawan said the roads were constructed between 2016 and 2017 in parts of the state.
He said that N56 billion was appropriated for 60 viable projects in 2016, adding that more than 80 per cent of the projects were being handled by the civil engineering department of the ministry.
He said that 26 of the 60 projects were completed, 13 ongoing, while 22 were awaiting approval.
Lawan said the completed projects included: Bulumkutu-Tsallake, Abbaganaram-Gongolong, Magoram, Bulabulin and Lagos Street.
Others are: Mala Kachalla-Ibrahim Taiwo Housing Estate, Airport and Ndurimari roads, adding that the projects wouls also cover the construction of a bridge on Lagos Street and several drains.
The commissioner said five rural road projects designed to open up the state were abandoned due to Boko Haram insurgency.
Lawan identified the abandoned projects as: Jere-Mafa, Gamboru-Wulgo-Ngala and the Gamboru-Ngala township roads.
He said: “Road and drains construction project awarded to REC International Nigeria Limited was also abandoned despite payment of 13 per cent of the cost.”
According to him, the project was about 80 per cent completed before it was abandoned.
Commenting on the ongoing reconstruction works, the commissioner said that some of the equipment procured included block moulding machines, articulated vehicles, 12 loaders, 600 tippers, concrete mixer, vibrators and 500 KVA power generators.
Other items were: 10 tonnes of bitumen, 24,000 cubic meters of crushed stones and 170 tonnes of asphalt to facilitate the execution of the projects.
He said that the state government had also procured 70 units of 32-seat buses for the state-owned Borno Express Transport Corporation, to enhance its operation.