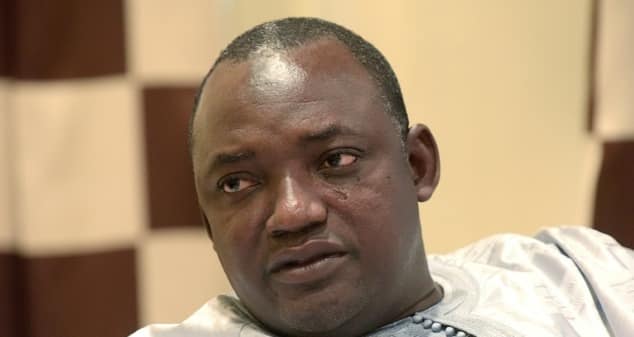 President Adama Barrow of The Gambia on Tuesday praised President Muhammadu Buhari for his leadership role in the stabilisation of African countries.
Barrow made the commendation at a news conference he jointly addressed with President Buhari after bilateral talks in the Presidential Villa, Abuja.
The 51-year-old Gambian president said that President Buhari played the role of a game-changer in Gambian politics as his contributions helped to ensure political stability, not only in The Gambia, but in Africa as a whole.
Barrow said: “When we met in Mali, he (Buhari) took a decision as a leader in a closed door meeting, where he made one statement that changed everything.
“He said that if The Gambian President (Yahya Jammeh) wanted to challenge the sub-region, he was welcome.
“This was his words and that made a big difference as a leader.
“And that leadership role was very important, not just for The Gambia, but for Africa because the problem was an African problem and the solution was an African solution.
“So we are very grateful and that is why we have come to say thank you.
“There is a saying in my country that if you want to thank a farmer for a good job, you have to visit him at his farm; that is why we are here.”
On agreements that led to the smooth transition in his country, Barrow commended ECOWAS, UNDP and the rest of the international community for the roles they plated in convincing the former president, Yahya Jammeh, to accept the will of the people.
He said: “Basically, the deal was struck by the ECOWAS, UNDP and the international community.
“In this mediation, Nigeria was involved; Liberia, as the chair, was involved; the Guinean and Mauritanian Presidents were also involved.
“The Guinean and the Mauritanian Presidents were physically on ground for him (Jammeh) to accept the will of the people and exit to allow us to assume office.
“This was the deal, he accepted to go on exile because we couldn’t guarantee his security. This was the deal.’’
While fielding question on possible assistances to be offered to The Gambia by Nigeria, President Buhari stated that the two countries would soon draw up programmes that would complement each other’s efforts on development.
He expressed the hope that such programmes when operational would help The Gambia to overcome some of its ongoing reforms meant to uplift the quality of life of the Gambians.
Buhari said: “We did our best in the most critical time, hopefully now the president will raise his team and we will raise a corresponding team and we will seat together and see how we can draw a political programme that will complements each other’s effort on development. So this is the next time we are going.”
Barrow, who is visiting Nigeria for the first time since his inauguration as Gambian President on January 19, 2017, ended the rule of long-time leader of Gambia, Yahya Jammeh, who is currently on exile in Equatorial Guinea.
It would be recalled that President Buhari played a major role in ensuring smooth democratic transition in The Gambia even when Jammeh refused to step aside.
The Economic Community of West Africa appointed Buhari the Mediator in Chief on the Gambian political impasse.