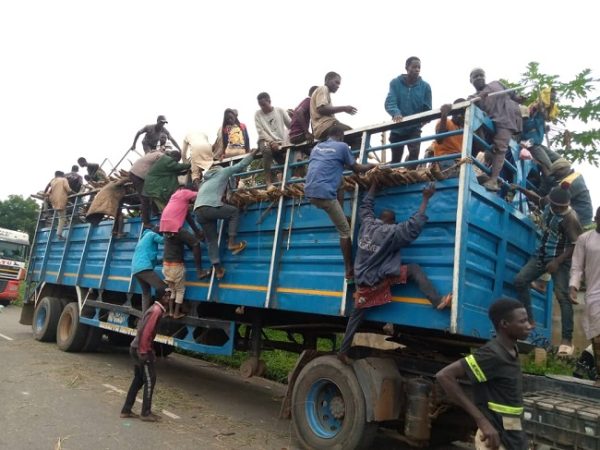 Operatives of the Ondo State Security Network Agency, also known as Amotekun, have intercepted another 168 suspected invaders with charms in two trucks.

The latest interception comes three days after the corps arrested 151 suspected invaders moving through the state.

The ones arrested earlier were found with charms concealed inside bags of rice at the Sango area of the state along the Akure-Ado Expressway.

The Commander of the Ondo Amotekun Corps, Akogun Adetunji Adeleye, said the new set was intercepted around Itaogbolu and Iju communities in Akure North Local Government Area of the state during a stop and search.

According to the commander, the suspects were coming from Kano and Jigawa States without any clear mission in Ondo State.

He said: “After the profiling of the earlier ones, majority of them that did not have any case to answer.

“We saw them off back to where they came from, but the influx of invaders still continues.

“On Sunday, our stop and search team saw these two trucks.

“They told them that they were on their way to Ondo State with cows.

“After careful examination, we found out that they carefully concealed about 40 motorcycles with 168 people lying down beneath the motorcycles.

“The upper floor has cows, the middle has motorcycles wrapped and dismantled and at the lower floor, we have 168 people lying down, such that if you are not careful, you won’t observe it.

“Upon interrogation, none of them had the address of where they were going, nobody invited them and we are becoming curious of these invasions.

“I call it invasion because you see over 100 able-bodied men concealing themselves under animals.

“It shows they are up to negative motives.”