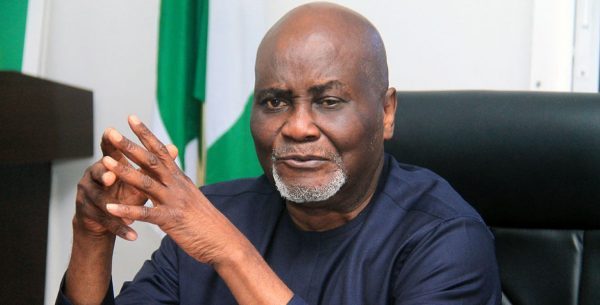 The Special Adviser to the President on Niger Delta and Coordinator, Amnesty Programme, Prof. Charles Dokubo, said on Tuesday that the use of technology incubation centres by beneficiaries of the programme trained and empowered in the agricultural and allied sector will improve their expertise in various areas of specialisation.
Dokubo noted that partnering the National Board for Technology Incubation will ensure the beneficiaries register their products with the National Agency for Food and Drug Administration and Control.
Speaking in Abuja, at the signing ceremony for a Memorandum of Understanding between the NBTI and Amnesty Office to use 23 technology incubation centres allocated to it for cluster manufacturing by beneficiaries of the Amnesty Programme, Dokubo said the partnership will enhance achievement of the goal of empowering the beneficiaries.
He said: “It is my great pleasure to see that the Memorandum of Understanding between the NBTI and the Office of the Coordinator, Presidential Amnesty Programme has reached the final stage of legal sealing to enable the commencement of its purpose.
“The use of these incubation centres by delegates is of immense support as it will improve their expertise in their various areas of specialisation.”
In his remarks, the Permanent Secretary, Federal Ministry of Science and Technology, Bitrus Nabusa, said the partnership between Amnesty Programme and NBTI will add value to the lives of youths in the Niger Delta.
Nabusa commended Dokubo for the initiative and transforming the Programme to deepen peace and stability in the region.
He said: “I am highly delighted to receive you here for this programme.
“The signing of MOU between the Presidential Amnesty Programme and the NBTI under the supervision of the Federal Ministry of Science and Technology is something new and positive.
“I am also glad at the performance of the Presidential Amnesty Programme; we have heard a lot about you.
“It is because of you that there is peace in the Niger Delta and that is something we should feel proud of.
The calm in the Niger Delta today is as a result of your efforts and I am extremely delighted that these two performing agencies are partnering to see further to the development of the delegates in the Niger Delta.
“This MOU signing today will further the use of facilities of the NBTI and at the same time, add value to the lives of youths of the Niger Delta.
“This will no doubt further improve the security situation of the region.”
Nabusa urged the partnering agencies to logically implement the provisions of the MOU, which, he said, would be beneficial not only to the Niger Delta but the entire nation.
He added: “I want to urge you to take this MOU seriously as all will stand to benefit from it.
“If the Niger Delta is at peace, then Nigeria is at peace and by this singular MOU we have signed today, it will go well to ensure that the delegates are well trained; value is added to their lives and security is assured in the Niger Delta.”
The Director General, NBTI, Dr. Jubrin Muhammed, explained that the MOU is aimed at impacting knowledge of the technologies based on raw materials available within the domain of the beneficiaries of the Presidential Amnesty Programme who indicated interest in the agro-allied sector.
Muhammed said the partnership signalled a turning point in the Amnesty Programme as youths in the Niger Delta region will be empowered to become gainfully employed.
He said: “We decided to collaborate so that the two agencies can benefit.
“NBTI is benefiting from the fact that we are going to use the opportunity to source for different technologies within the region so that we can convert them to knowledge-driven and sustainable enterprises in such a way that the trainees will improve to become key players in the nation’s economy, while the Niger Delta and the Amnesty Programme will benefit in such a way that the beneficiaries for which the establishment was made will become beneficiaries of the NBTI incubation programme.”
Beneficiaries of the Amnesty Programme trained on production of rice, garri, plantain-flour, plantain-chips, chin-chin, smoked fish, chicken, snail, fruit juice and cosmetics, among others, will benefit from the partnership.
The 23 NBTI technology incubation centres approved for the Amnesty Programme to be used by the beneficiaries are located in Edo, Abia, Imo, Ondo, Rivers, Cross Rivers, Akwa Ibom, Bayelsa and Delta States.