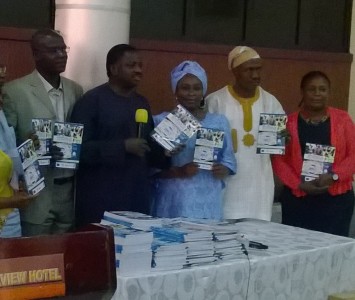 Share
Facebook Twitter LinkedIn Pinterest Email
Femi Adesina, Media Assistant to President Muhammadu Buhari, has urged the Nigerian media to ensure adherence to journalism code for the enhancement of professionalism in coverage of events.
Adesina made the call at the launch of: “Reportage of 2015 Elections: A monitoring scorecard of print and online media,” on Thursday in Abuja.
The book is published by the International Press Centre and the National Press Council with the support of the UNDP Democratic Governance for Development Project II.
According to Adesina, the media code, which was launched in October 2014, and the publication launched Thursday are necessary for media practitioners in order to pave way for professionalism on the job.
He said: “There was a bit of drawback with that code because it was not widely circulated; it should be made available to all newsrooms.
“It is important that we continue to build on that work that is done.
“One of the strengths of the 2015 elections was that the media generated so much awareness for it.
“One of the drawbacks too was that there was so much hate speech and foul language used during the period but the positive and the negative are works in progress.
“It is important that we circulate this report to every stakeholder, every professional to learn from what happened during the 2015 elections.”
Presenting the book, Adesina expressed the hope that it would open a new vista for reportage of news in the country.
In a keynote address, Prof. Nosa Owens-Ibie, who teaches media and communication at Caleb University, said the future of journalism in Nigeria was bright.
Speaking on: “Ethics in Election Reporting: Looking into the Future,” Owens-Ibie urged practitioners to monitor the outcome of the implementation of this election report.
According to him, this will enhance productivity on the part of the government and ensure the timely benefits of the dividends of democracy.
Summarising the media monitoring report, Lanre Arogundade, the Director of International Press Council, said 22 national and regional newspapers, four online media and three social media platforms were monitored.
Arogundade said there were 117 sensational headlines, incitement and hate speeches, adding that stereotypes were recorded in the six-month period while the reportage on women was low.
Arogundade, however, recommended that fair access and equitable coverage should be given to women during elections as they were half of the population.
“There is an urgent need for a meeting of media stakeholders to review and discuss the way forward as far as the Nigerian media code of election coverage is concerned,” he said.
The President of Nigeria Union of Journalists, Alhaji Waheed Odusile, said: “We need to bring respectability back to journalism.
“We need to respect our integrity.
“Let us do the right thing.
“Let us have standards.
“If you want to be a journalist henceforth, please go and learn to be a journalist.
“Let’s join hands together to lift journalism and restore confidence in the profession.”
Odusile called on the UNDP to organise an interactive session for journalists to discuss the report, to ensure improved reportage in future electioneering processes.
The President of the Nigeria Association of Women Journalists, Ifeyinwa Omowole, urged the media to put on its “gender lenses” and be gender responsive in their reportage.
Omowole urged journalists to tone down some of their sensational reports as these could have adverse effect on the nation’s unity.
She said: “Some of our reports can break our country.
“Some of us write reports as if we are not Nigerians.
“We have to ask ourselves questions before filing our stories.
“Think Nigeria first before you report.
“Look at all the foreign news, their journalists do not run their countries down even when they are reporting facts.
“Be patriotic and ethical in your reportage.
“Ask yourself will that story you are putting out make or break Nigeria?”
Toyin Gabriel, Media Expert on UNDP Project, said that the report was “the largest media monitoring project in the past elections”, explaining that it excluded the broadcast media because of time constraints.
“The stakes were high to ensure that the end product can compete with any of such report from anywhere in the World,” Gabriel said.
Other speakers at the event included Nnamdi Njemanze, the Executive Secretary Nigeria Press Council, and Edetaen Ojo of Media Rights Agenda.
NAN.
Femi Adesina UNDP
Share. Facebook Twitter Pinterest LinkedIn Tumblr Telegram Email