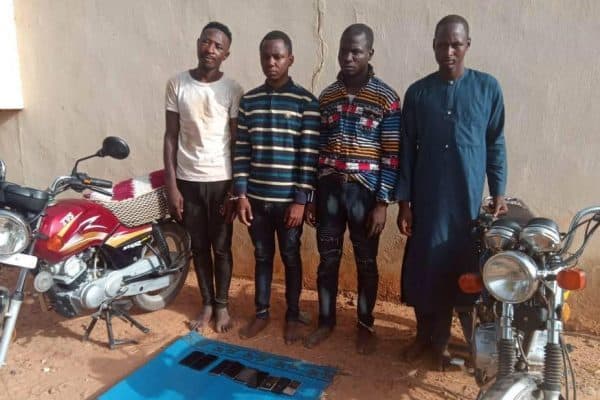 The abductors of Hajiya Hauwa Yusuf, the mother-in-law of the Katsina State Governor, Aminu Masari, have been arrested.
According to information available to The Eagle Online, the abductors have also been responsible for several armed robberies and kidnappings within Katsina, Kano and Zamfara States.
Arrested also was the their hard drugs, arms and ammunition suppliers, leading to the recovery of several weapons, ammunition and hard drugs.
Hajiya Yusuf was kidnapped on February 2, 2019 at her residence in Katsina.
Sequel to this, the Inspector General of Police, Mohammed Adamu, directed operatives of the IGP-Intelligence Response Team attached to Operation Puff Adder to launch a massive manhunt for the kidnappers.
After serious and unrelenting follow up, the notorious syndicate of kidnappers, including their arms and ammunition suppliers, who confessed to the kidnapping and other armed robberies and kidnapping in Katsina State, were arrested by the IRT, headed by Deputy Commissioner of Police, Abba Kyari.
Those arrested were Abdullahi M. Sani, 23, of Sokoto Rima area of Katsina State; Abubakar Dani, 21, of Sabuwar Unguwa; Marwana Gide, 25, of Yan Maiwa village in Katsina; and Rabe Hamza, aka Tankabaje, 35, of Nasarawa Bugaje village.
Others were Abdulkarim Aliyu, 20, a native of Katsina; Musa Yakubu, 21, also a native of Katsina; Abubakar Abdullahi, 25, a native of Katsina; Napkon Sambo, 31, who is from Jos, Plateau State and their chief arms supplier; and Haruna Adamu, 31, native of Katsina, who transports arms and ammunitions to the gang.
Also arrested by the IRT were Taiwo Abayomi, 28; Ali Samaila, 45, native of Mairuwa Village; Abubakar Sulaiman, 30, native of Mairuwa Village; and Ibrahim Bille, 30, native of Mairuwa Village in Katsina State.
Information available to The Eagle Online said they were all tracked to their hideouts and arrested in the Federal Capital Territory, Abuja, Platueau, Kano and Katsina States.
The suspects were said to have confessed to the kidnapping of Hajiya Yusuf, narrating how they negotiated, collected ransom and shared it.
One of the kidnappers led the IRT team to a new provision shop he Opened with the ransom money in Katsina town.
Lands and houses they bought with the ransom money have also been identified and seized.
Recovered from them were one AK47 rifle, 22 Magazines, 1,000 AK47 live ammunitions, 200 Cartridges, some phones belonging to their victims, including the phone used for ransom negotiations and two motorcycles, which they used for their operations.