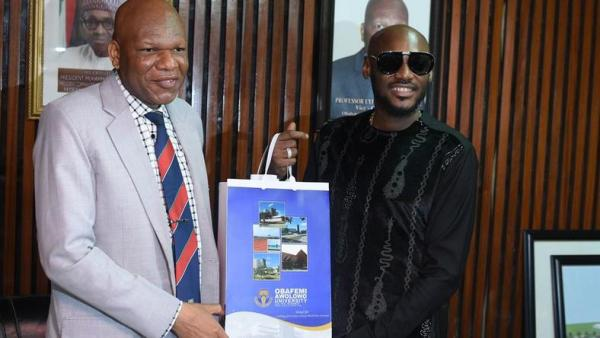 Nigerian music icon, Innocent Idibia, aka 2Face, has been conferred with the award of the Fellow of the school of music by the Department of Music, Obafemi Awolowo University, Ile Ife.
The 43 year-old Singer, who is also a songwriter, record producer and entrepreneur became the pioneer recipient of the award which was presented to him at the department’s 1st public lecture and fellowship award on Wednesday.
2Face had earlier announced through his Instagram handle, @official2baba that he would be delivering a public lecture at the institution after which the award of the fellow of school of music would be conferred on him.
“Being the torch-bearer for the new pop movement is a role I do not take lightly. And I am honored to have been found worthy of such noble albeit enormous responsibility.” 2Face Idibia said as he received the award.
2Face, who was also a guest lecturer presented a paper on the topic “2 decades of Afro-pop in Nigeria: The perspective of 2Baba”.
The music icon, who has stayed relevant in the Afro-pop scene for two decades and one of the most decorated and successful Afro pop artists in Africa was honoured at Igbinedion University in 2016.
He is a recipient of several awards including five Headies Awards (Hip-hop award), four Channel O Music Awards, BET Award, MOBO Award, Kora Award, MTV Europe Music Award, World Music Award.
He has released several albums including; Face 2 Face, Grass to Grace, The Unstoppable, Away and Beyond, The Ascension.
The award winning singer and songwriter was a member of the defunct music group, Plantashun Boiz with Faze and Blackface.
The group successfully produced two albums in 2000 and 2003 after which they split in 2004.
2face released his solo debut album Face 2 Face in 2004 after which he gained recognition.
The 43-year-old producer established an NGO called 2Face Idibia Reach-Out Foundation, whose motto is “service to humanity”.
In 2009, he was appointed as ambassador by the National Agency for Food and Drug Administration and Control.
He is the founder of Hypertek Entertainment and also the owner of the Buckwyld and Breathless concert.