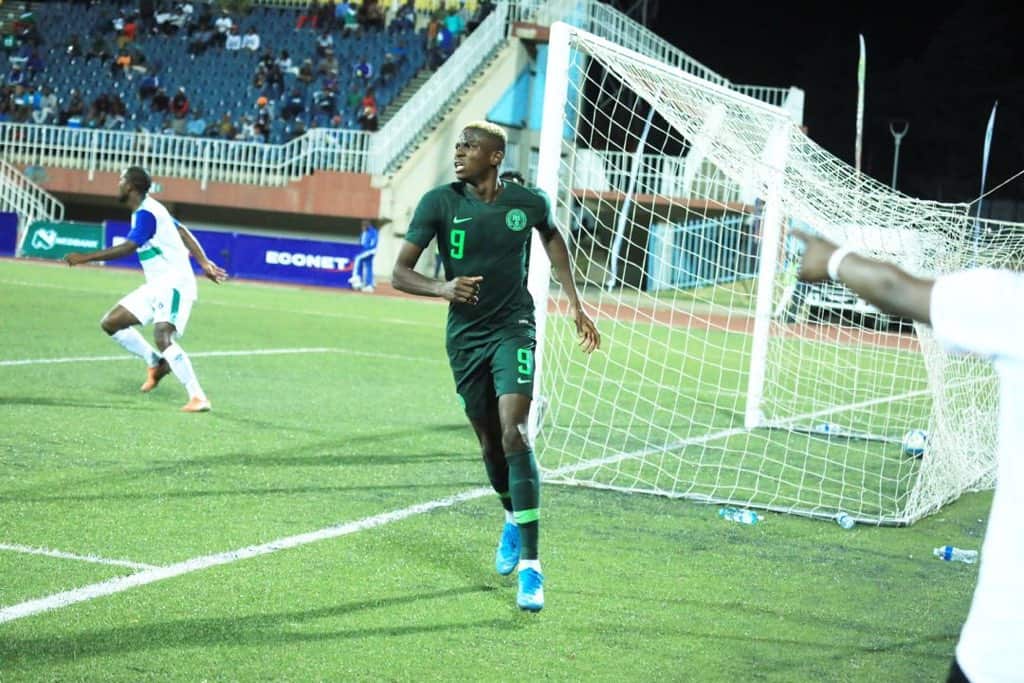 A brace from Victor Osimhen and a goal each from Alex Iwobi and Samuel Chukwueze were all the Super Eagles needed to seal a 4-2 win the Crocodiles of Lesotho at the Setsoto Stadium, Maseru on Sunday.
Super Eagles’ manager, Gernot Rohr, kept to his starting line up in the opening group game against Benin in Uyo, with South Africa-based Daniel Akpeyi in goal, while Chidozie Awaziem, Ola Aina, Wilfried Ndidi, William Troost-Ekong and Semilogo Ajayi provided him with cover in the defence.
Everton’s Alex Iwobi alongside Joe Aribo, Moses Simon and Samuel Chukwueze were assigned midfield role, while in-form Lille striker, Victor Osimhen, was kept in the attack.
Against the run of play, the hosts shot into the lead after 13 minutes into the game, but Iwobi levelled scores in the 28th minute.
The Everton new buy connected a pass from Osimhen to slot home the ball to keep scores at one-all.
Nigeria increased tally in the 38th minute by Chukwueze as Osimhen grabbed his second assist of the afternoon.
In the 75th minute, Nigeria broke through Ola Aina, who found Osimhen from the right flank for the striker to score his first goal from open play to make it 3-1.
With five minutes left on the clock, Ramon Azeez found Osimhen, who beats the on rushing goalkeeper to score his second goal and Nigeria’s fourth goal.
Chidozie Awaziem however scored an own goal on the dot of 90 minutes as the tie ended 4-2 in Maseru.
Nigeria leads Group L of the 2021 AFCON qualifiers with six points from two matches ahead of Benin who are on three points, while Lesotho and Sierra Leone have one point each.
The former African champions will host Sierra Leone in their next game on August 31, 2020.