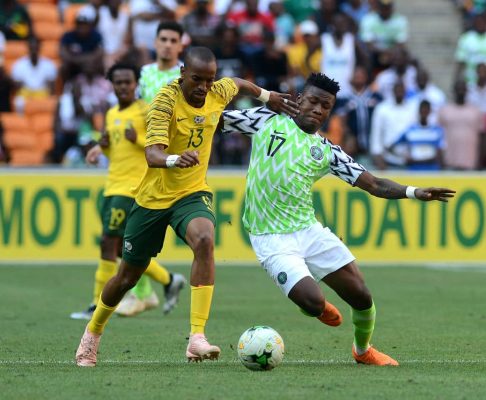 South Africa joined Group E leaders Nigeria to qualify for the 2019 Africa Cup of the Nations finals after defeating Libya 2-1 in their final qualification match on Sunday.
The News Agency of Nigeria reports that the match, played at the Stade Taieb Mhiri in Sfax, Tunisia, saw the hosts dominate the opening stages.
They kept Darren Keet busy in the South Africa goal.
The Bidvest Wits goalkeeper was called into action in the seventh minute and he denied Libyan attacker Ismael Tajouri-Shradi.
The Mediterranean Knights continued to press and they had another chance to break the deadlock with the half hour mark approaching.
Ali Elmusrati’s goal-bound effort was brilliantly saved by Keet as he continued to keep Libya at bay.
South Africa came close to scoring when Themba Zwane’s low shot was deflected wide by the Libya defence in the 39th minute.
The score was 0-0 at the interval, thanks to some good goalkeeping by Keet who denied Ahmad Benali on the stroke of half time.
South Africa broke the deadlock just five minutes after the restart through star forward Percy Tau.
The Belgium-based attacker scored with a thunderous left-footed shot which beat Muhammad Nashnoush to make it 1-0 to South Africa.
The hosts then piled pressure on the Bafana Bafana defence and the Mediterranean Knights were awarded a penalty kick after Anis Saltou was fouled by Keet.
Former Manchester City midfielder Benali beat Keet from the penalty kick spot to make it 1-1 in the 65th minute, much to the delight of the home crowd.
However, parity was only restored for three minutes as Tau scored a second for the South Africans with a curling effort from inside the box, with Kamohelo Mokotjo grabbing an assist.
South Africa’s head coach Stuart Baxter pulled out attacker Zwane and the British tactician introduced defensive midfielder Hlompho Kekana.
The visitors managed to contain Libya in the closing stages of the match as South Africa ran out 2-1 winners on the night as the Mediterranean Knights failed to qualify.
Group E Final Table
Team P W D L GF GA GD Pts
Nigeria 6 4 1 1 14 6 +8 13
South Africa 6 3 3 0 11 2 +9 12
Libya 6 2 1 3 16 11 +5 7
Seychelles 6 – 1 5 3 25 -22 1
NAN.