150 doctors protest in Calabar against kidnap of colleague 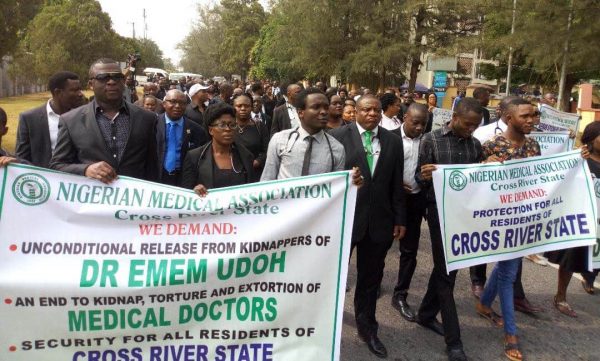 Share
Facebook Twitter LinkedIn Pinterest Email
Over 150 doctors from private, public and missionary hospitals and those in tertiary institutions in Cross River State on Wednesday, protested in Calabar against the kidnap of their colleague, Dr. Emem Udoh.
Udoh, a Senior Registrar in the Department of Paediatrics, University of Calabar Teaching Hospital, was kidnapped on Monday in Calabar.
The doctors, who wore black attires, had on Tuesday threatened to down tool because six of their colleagues and family members had been kidnapped in the last few months.
They had also expressed relief over the release of their colleague, Dr. Usang Ekanem, who was kidnapped on December 26, 2017 and set free on January 7.
Ekanem works in Cross River State College of Education Medical Centre in Akamkpa Local Government Area of the state.
The aggrieved doctors, who protested along major streets in Calabar, culminating at the Government House, expressed displeasure with the State Government over its approach toward abduction of doctors in the state.
The Chairman, Nigeria Medical Association in the state, Dr. Effiong Mkpanam, said all hospitals in the state would remain closed until their colleague was released.
Mkpanam urged the state government to address the current security challenges in the state.
He said: “We are not safe and we want people to know that we cannot go to work because we are not safe.
“We want unconditional release of Dr Emem Udoh who is a nursing mother and until she is released, all the doctors in Cross River State will sit at home.
“Anybody who wants medical treatment should go to the neighbouring states.”
The chairman decried the level of insecurity in the state, adding that Cross River State was no longer safe for residents and tourists.
The NMA spokesman in the state, Dr. Ernest Ochang, said doctors in the state would sit at home anytime a doctor or a family member was kidnapped.
Ochang said: “The litmus test for any leader is security and safety of its citizens. But when we are not safe, we dare say that the government has failed the litmus test.
“The government, however, has the litmus test of redeeming itself by ensuring the release of Dr Emem Udoh.
“If Udoh is brought back today, we will resume work today. But until then, anyone seeking medical attention in Cross River State should go to neighbouring states.”
The Secretary to the State Government, Tina Agbor, said government was doing everything possible to secure the release of the abducted doctor.
Agbor noted Governor Ben Ayade was unhappy about the security situation.
She said: “It is unfortunate that soon after one of the doctors was released, another one was abducted, and this time, a woman.
“I am a woman and right now, the Security Adviser to the Governor is on the streets trying to solve this problem.
“You did not need to come here to remind us of our duty because we are doing something about it.”
Cross River State Emem Udoh University of Calabar
Share. Facebook Twitter Pinterest LinkedIn Tumblr Email