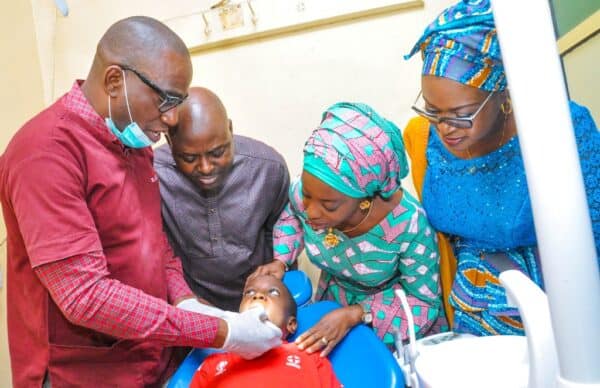 No fewer than 1,000 people have so far benefited from the free surgical intervention, including orthopaedic surgery, eye surgery, dental procedure, ENT surgery, amongst others, being offered by the Lagos State Government and a non-governmental, BOSKOH Lagos Healthcare Mission.
The surgical intervention, which is an offshoot of the free screening conducted in designated primary health centres across the State, is being done simultaneously in seven general hospitals.
The First Lady of Lagos State, Ibijoke Sanwo-Olu, who visited beneficiaries of the free medical intervention in five of the centres on Friday, expressed delight at the impact the interventions had in the lives of beneficiaries.
Sanwo-Olu said: “I have been round five general hospitals today to observe what has been done for the past few days.
“I was at the Massey Street Children’s Hospital; General Hospital, Lagos; Onikan General Hospital; Gbagada General Hospital; and the Orile-Agege General Hospital and I must say I am impressed with surgeries that were being done and it is indeed heartwarming that the beneficiaries of these free surgical interventions were quite appreciative”
Sanwo-Olu, who gave kudos to the management of BOSKOH Lagos Healthcare International for the humanitarian service, noted that she is impressed by interventions that were carried out so far.
She said she is aware that the medical team even worked during the last public holiday to ensure the success of the programme.
She expressed optimism that there is hope for improvement in the health sector with various health interventions being implemented by the present administration, adding that this shows that there is hope for Lagos, there is hope for the citizens.
According to the Executive Director of the NGO, Nike Osai, over 88 eye surgeries were carried out in Orile Agege General Hospital, while over 120 surgeries have so far been done at Onikan General Hospital.
Osai stressed that over 300 cases were currently being treated at the General Hospital, Lagos, while surgeries are still ongoing at Badagry and Epe General Hospitals.
She said: “As we speak, surgeries are going on in all our centres and we really appreciate everyone that has partnered with us and volunteered for this noble course without being paid.”
She appreciated the Lagos State Government and the Governor of Lagos, Babajide Sanwo-Olu, for deeming it fit to partner with her organization to bring succour to people, especially children who are the most vulnerable in the society.