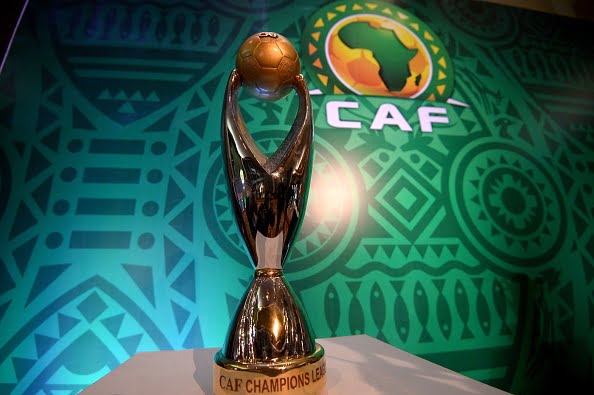 TOPSHOT - This picture shows the trophy prior to the draw of the Confederation of African Football's (CAF) Champions league at the Ritz Carlton Hotel in Cairo on December 28, 2018. (Photo by MOHAMED EL-SHAHED / AFP) (Photo credit should read MOHAMED EL-SHAHED/AFP/Getty Images)
Share
Facebook Twitter LinkedIn Pinterest Email

Wydad Athletic Club’s hunt for a third CAF Champions League title remained on course on Friday after storming through to the final.

This was in spite of a 1-1 home draw with Angola’s Petro de Luanda in the return leg of their semi-final fixture.

The Moroccans progressed with a 4-2 aggregate score, having won the first leg in Luanda 3-1 last week.

Petro broke the deadlock through Gleison, but Amine Farhane drew his side level to ensure they avoided defeat at home.

They have now earned a place in the final against either holders Al Ahly or ES Setif, with the two sides playing their second leg on Saturday.

The Angolans who were seeking their first-ever qualification for the final came into the match needing a huge performance to overturn the first leg defeat.

They were off to a fast start off the blocks and had the first threat at goal in the 17th minute.

That was when skipper and top goalscorer Tiago Azulao quickly turned from range, but his shot rose inches over the bar.

Three minutes later they however broke the deadlock with a brilliant goal from Gleison.

The forward picked the ball from the right before drifting into the edge of the box and striking a brilliant left footer that rolled into the bottom left of Wydad’s goal.

The home side were woken from their slow start and pushed on by the capacity home crowd, drew level in the 28th minute.

This was when defender Farhane sneaked in to head in a corner-kick from Yahia Attiyat Allah.

The goal put off Petro’s calculations as they knew a second goal would have put them at an advantage.

They however kept on the fight and had a sniff at goal in the 37th minute when Azulao twisted and turned inside the penalty box.

But his eventual shot was deflected wide.

In the second half, Petro came out all guns blazing with Azulao twice trying his luck from distance, but he could not get a second goal for his side.

In the 75th minute they came close when Yano went for another scorching long ranger, but the effort was wide.

Anderson Cruz also had a chance with a shot from the left but it was saved by the goalkeeper.

At the death, Petro should have scored a winner on the night.

But Wydad goalkeeper Ahmed Reda Tagnaouti made a superb double save to block a shot from Cruz and the rebound from Job.