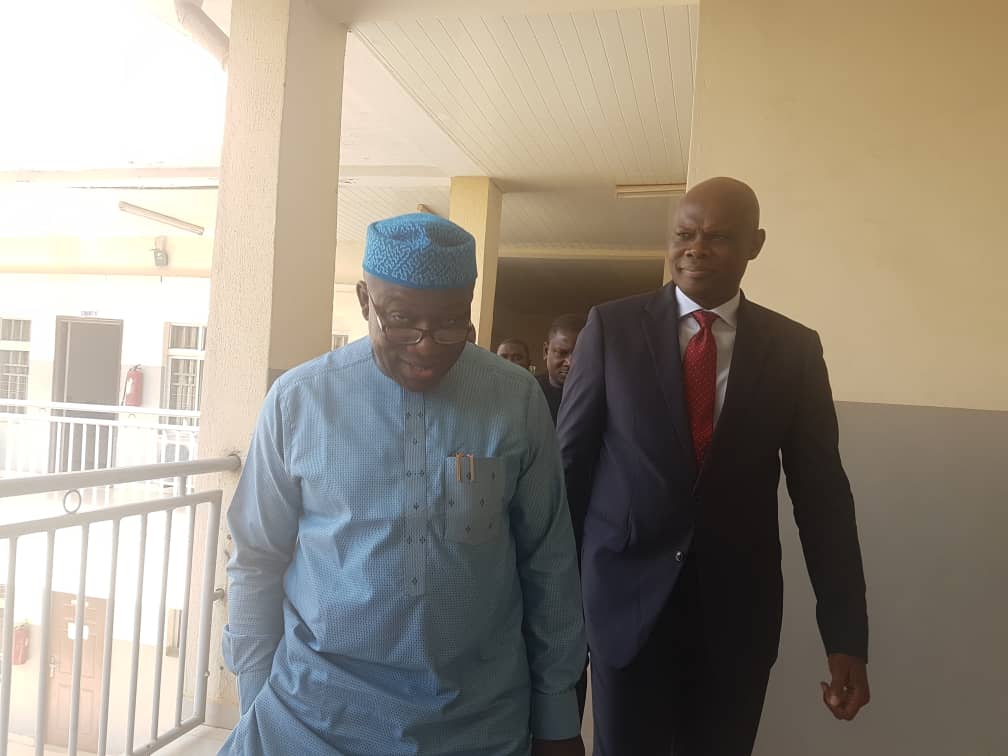 The Ekiti State Governorship Election Petition Tribunal sitting in Abuja has been told that the July 14, 2018 election was free, fair and credible by all standards.
A witness, Adunmo Rufus Sunday, on Monday told the Tribunal that contrary to the allegations of bias, violence, vote buying and general malpractices by the Peoples Democratic Party and its candidate, Prof. Olusola Kolapo, who are the petitioners, the election was devoid of rancour and violence.
Led in evidence by Prince Lateef Fagbemi (SAN), counsel to Governor John Kayode Fayemi, the candidate of the All Progressives Congress, the witness specifically informed the tribunal, headed by Justice Suleiman Belgore, that officials of the Independent National Electoral Commission were not biased against any of the parties.
Adunmo, who was the Deputy Director General of the JKF Campaign Organisation, maintained that it would amount to day-dreaming for anybody or group to say that the election was not free, fair, credible and acceptable.
The witness, who claimed to be in the situation room established by the campaign organization to monitor the election, told the tribunal that he never got any report of violence, vote buying or any malpractice and that all agents of political parties that participated in the election signed the result sheet at the various collation centres.
Adunmo further informed the tribunal that law and order were effectively and sufficiently maintained by police and other security agents during the poll.
He said: “It is not true that INEC favoured John Kayode Fayemi in the election.
“The allegation of vote buying is also not true and, in fact, the election is one of the best conducted by INEC.
“Anyone saying anything contrary to this must be day-dreaming.”
However, under cross examination by Chief Roland Otaru (SAN), counsel to the petitioners, the witness, who tendered the judgment of the FCT High Court delivered by Justice Othman Musa, said he was not a member of the Action Peoples Party, which instituted the case that sought to disqualify Governor Fayemi from contesting the July 14 election, but dismissed by the court.
The witness admitted before the tribunal that his disposition on oath was based on reports obtained from other APC agents during the election.
The PDP and Kolapo had filed the petition praying the tribunal to declare them as winners of the election on the ground that they scored majority of the lawful votes.
They alleged that Fayemi’s victory was as a result of vote buying, wide spread rigging, malpractices and that INEC officials favoured the governor during the election.
Meanwhile, Governor Fayemi, who was present at Monday’s proceeding, was commended by the Chairman of the Tribunal, Suleiman Belgore, for conducting himself in a gentlemanly manner.
Fayemi had arrived the tribunal and quietly taken his seat by 9.48am after exchanging pleasantries with his lawyers and lawyers from the opposing camp.
The Tribunal Chairman, in his opening remarks at the commencement of proceedings at 10.03am, said: “I didn’t notice you are here.
“Thank you for coming in so quietly.”
Fayemi told journalists that he was confident that the tribunal will do justice to all issues raised in the petition.
Also, Fagbemi expressed optimism that the tribunal will be able to complete hearing of the petition within the time allowed by law on the ground of the steady progress being made by the tribunal and cooperation of counsel to parties.
Chief Edosomwan (SAN) led the team of other lawyers for the 1st Respondent, INEC. Chief Akin Olujimi (SAN), Abiodun Owonikoko (SAN), Yomi Aliyu (SAN) and a host of other lawyers appeared for the 2nd Respondent, APC, while Fagbemi, John Bayeshea (SAN), Dr. Muiz Banire (SAN) and many other lawyers appeared for Fayemi, the 3rd Respondent.
The tribunal had earlier granted 10 sitting days to each of the Respondents and Monday was APC’s ninth day.
In a twist to the case, however, the lead Counsel to APC informed the court that upon a critical review of the case so far, there won’t be any need to call further witnesses and that the 2nd Respondent will be closing its case.
Following that application, the court accordingly closed the 2nd Respondent’s case and ordered the 3rd Respondent to open his defence.
Thereafter, the 3rd Respondent’s counsel informed the court that they were ready to open the defence of the 3rd Respondent right away.
Immediately this was announced, it sent jitters to the Petitioners’ camp and confusion descended on the lawyers as many of them rushed out of the court.
The 3rd Respondent’s first witness, Adumo Rufus, mounted the witness’ stand as Respondents’ witness number 60 (RW 60) and when Fagbemi was about to introduce the witness, Mallam Yusuf Ali (SAN), who led the team of the Petitioner stood up and begged the court for a short stand down to enable them put their house in order.
The court then granted their request since there was no objection from other defence Counsel.
The proceedings resumed about 20 minutes later.