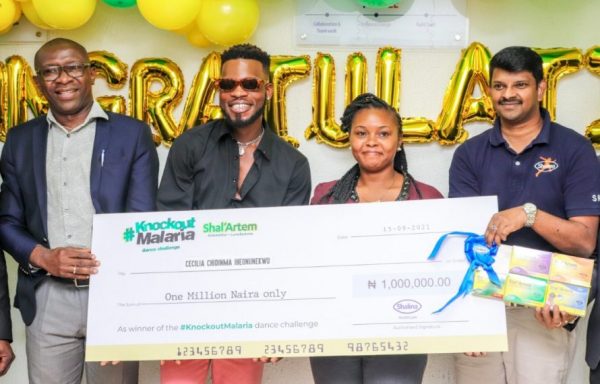 The much awaited winners of the Shal’Artem Knockout Malaria Dance Challenge have emerged. The organisers of the competition,  Shalina Healthcare Nigeria, announced the winners recently in Lagos while the winners were presented with their prizes accordingly.

Speaking on the dance challenge,  the Chief Executive Officer of the pharmaceutical company, Shalina Clifford, said the challenge was a social initiative principally to make meaningful contributions to health development in Nigeria by  raising awareness about malaria.

She said; “the mission of the company is to provide quality medicine that are affordable and available. The dance challenge is a social initiative in this direction, sponsored by Shal’Artem, a brand of Shalina Healthcare to raise awareness about malaria.”

In the same vein, the company’s Brand Manager, Analgesic and Anti- Malaria, Chiuba Nwosu, said that the challenge goes beyond dance but about awareness on one of the major deadly diseases that have been ravaging the society for long.”

According to him, “the essence of the dance challenge is to ensure that majority of the people is aware that malaria can be kicked out within three days through Shal’Artem. The fact is that about 32% globally are currently affected by malaria and in this, Nigeria is very prominent. So the idea of the challenge is to use the social media as a platform to engage the people on this issue and this has been very productive.”

Speaking on the process of the challenge, Nwosu said; the #KnockoutMalariain3daysdancechallenge received an overwhelming entry which has indeed raised the conversation and social engagement about solution to malaria. Through the initiative the Shal’Artem brand empowered individuals to create and share their own dance content across their social media handles using the Shal’Artem jingle. Quite notable is the role played by the Shal’Artem Brand Ambassador Broda Shaggy, as his effort generated public discuss about the attainment of #ZeroMalariatargetinNigeria. The participants were made to try to mimic Broda Shaggy’s dance. They dance and try to beat Broda Shaggy’s “Shally Dance” with the jingle provided. The participants were however encouraged to be creative as possible.”

Unveiling the winners, Nwosu said that; “Total prize money of1,850,000.00 was won by twelve contestants. And the winners were selected based on the dance content with the highest views, likes and engagements across social media platforms.”

The winners were, Cecilia Chidinma Iheonuekwu who emerged the grand prize winner, which was a sum of N1 million, Victoria Adebanke Olusoji, the runner up, who won a sum of N300,000 and the third prize winner, Festus Chinemerem Wisdom who won a sum of N100,000 respectively. There were also five consolation prizes of N50,000 each and a new category of most creative dance was also rewarded. The creative category had four people who also won N50,000 each.