Why I killed my girlfriend, burnt her to ashes – Suspect 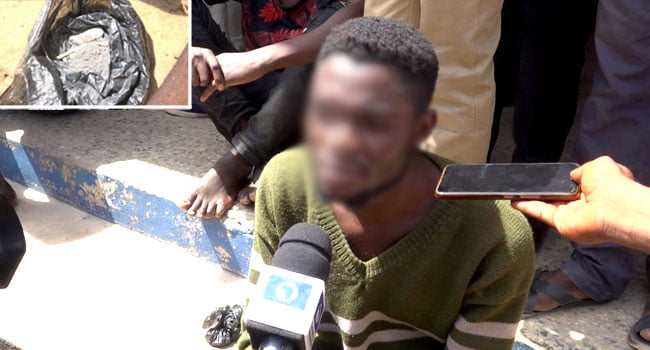 The Taraba State Police Command has arrested and paraded a 31-year-old man for killing his girlfriend.
A native of Donga Local Government Area, the suspect, identified as Munda Bala, allegedly conspired with two of his friends to kill his girlfriend.
Briefing journalists at the Command Headquarters in Jalingo, the Police Public Relations Officer, David Misal, said the victim was burnt to ashes and her remains buried in a bush.
Misal noted that efforts were in top gear to arrest the other two fleeing suspects, while the principal suspect would be charged to court.
The suspect, who was paraded with some ashes and bones of his victim, admitted to have committed the crime and blamed economic hardship and jealousy for his decision.
Bala said: “I fell in love with Imbajuri Ambisi.
“She became my girlfriend; I got her pregnant and she delivered a baby boy and killed him after seven months.
“This got me angry and I couldn’t tell anyone.
“My money got finished and she ran away to some wealthy guys who engage in the selling of rosewoods to foreigners.
“This got me jealous and I met two of my friends who advised me that if I really want my heart to be at rest, I have to kill her, hence our decision to eliminate her.”
The command’s spokesman also paraded five suspected ritualists whose supposed victim escaped with a deep cut after luring him to cut fingernails for their boss in a forest in Kona Garu, a suburb of Jalingo metropolis.
Investigations, according to the police, indicate that the suspects have been in such nefarious acts for a long time.
Misal noted that the suspects would also be charged to court for prosecution.
Also paraded were five suspected kidnappers and armed robbers who have been terrorising Mahanga Village along the Jalingo-Wukari Expressway.
The police said the suspects were responsible for the security threats along the axis as they stop commercial vehicles and abduct passengers to unknown destinations.
Other suspects were paraded by the police for criminal conspiracy, culpable homicide, armed robbery and purchase of stolen properties among others.
All the suspects admitted to have committed the crime they were accused of.
Channels TV.