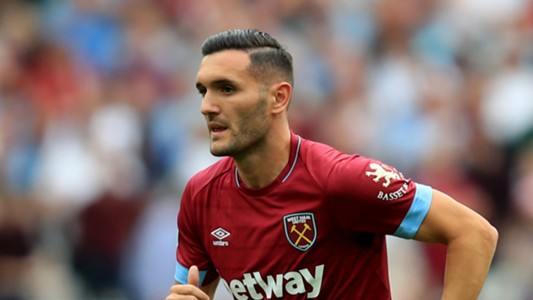 West Ham United striker Lucas Perez has defended himself in the wake of media reports that he refused to warm up and come on as a substitute on Sunday.
The match in question was the 3-1 win of the London club over Everton in the Premier League.
The Spaniard was on the bench and looked like he was about to replace the injured Marko Arnautovic in the second half, but manager Manuel Pellegrini brought on midfielder Michail Antonio instead.
Perez was then captured by TV cameras in conversation with West Ham’s goalkeeping coach Xavi Valero on the bench and some sections of the British media reported that he had refused to play.
He said: “Given the false information spread by the media that has affected my image, I am obliged to explain the only truth.
“I have never ever refused to warm up in my whole career, let alone play a match. In the moment that Marko got injured, I was on the bench after warming up.
“The coach called me to go out to play, however having realised that it was faster to substitute Antonio in, who at that moment was warming up, he changed his decision.
“The images that have been misinterpreted correspond to a talk with the goalkeeper’s coach, in which I never refused to warm up and explained what happened.”
Pellegrini said after the match that he had no problem with Perez and that “Antonio was already ready so played as I needed to make the change”.
The victory was West Ham’s first of the season and lifted the club off the bottom of the table and up to 16th place.