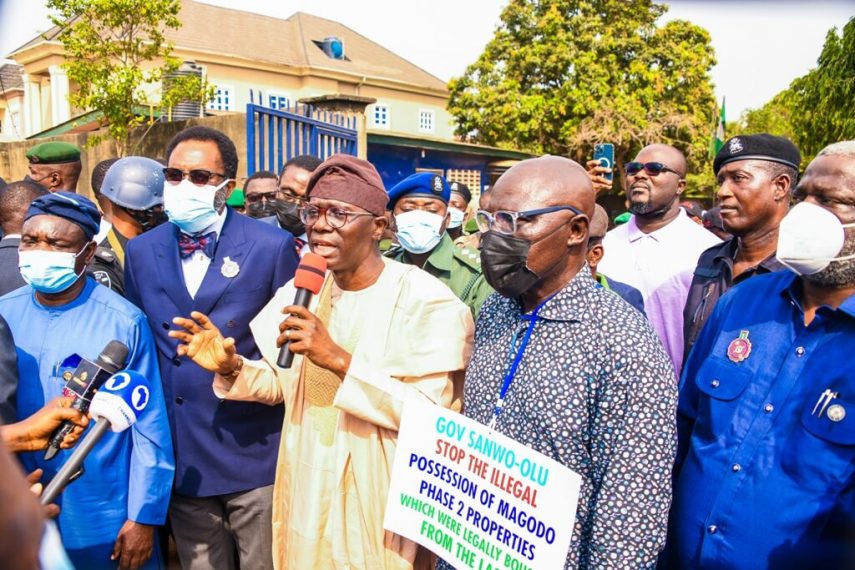 A Chief Superintendent of Police, Abimbola Oyewole, openly defied the order of the Lagos State Governor, Babajide Sanwo-Olu, to vacate the Magodo Phase 11 Estate along with his men on Tuesday.

The residents of the estate had taken to the street to protest the continuous presence of policemen in the estate.

A few weeks ago, police officers numbering about 50 stormed the estate in the company of some persons believed to be land grabbers to demolish the houses.

They stated that they were acting on a court order obtained from the Supreme Court.

They were however stopped but they have since laid siege in the estate.

On Tuesday afternoon, Governor Sanwo-Olu led some members of his cabinet to the estate to speak with the protesting residents.

While at the estate, the governor asked the police officers led by Oyewole to vacate the estate, but the CSP told Sanwo-Olu that he and his armed colleagues were at the estate on the orders of the Inspector-General of Police, Usman Baba; as well as the Attorney General of the Federation and Minister of Justice, Abubakar Malami (SAN).

Facing the police officer, Governor Sanwo-Olu said: “Can you call your superiors in Abuja and tell them that the governor is here and as the Chief Security Officer, you don’t have any business being in my state right now and that I want you to disengage right now?”

Responding, the CSP said: “I am here on the instruction of the Inspector General of Police through the AGF.

“I am too small or too low to call them.

“Your Excellency sir, you can call them sir.”

Asked of the number of policemen at the estate, the defiant leader of the police team told the governor: “My men are here; they are all over the place.

“I cannot precisely tell you how many we are.

“For security purpose, I cannot tell you the number.”

Seeing that Oyewole will not obey his order, the Governor turned to journalists, declared the presence of the policemen as illegal, adding that he would make some calls to the IGP and the AGF.

He said: “They (policemen) are not from the Lagos State Police Command.

“They said they are from Abuja.

“I don’t know what other interests they have beyond keeping the peace of the country.

“This is not an expectation that I expect from them because they don’t have any business here.”