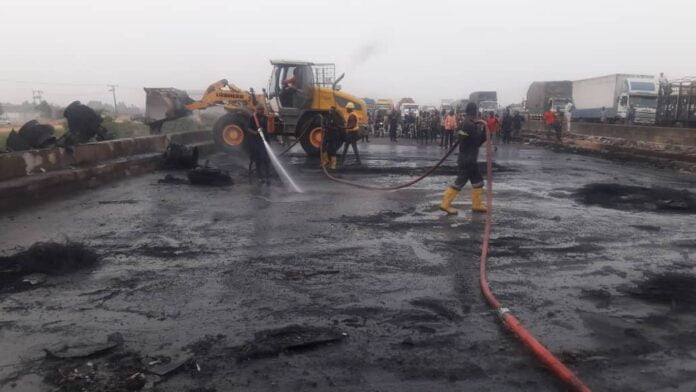 The fire from Tuesday’s explosion of a fuel laden tanker has been put off and the carcass of the vehicle towed to a safe area of the ever busy road.
According to available information, the carcass was pushed down to the foot of the long bridge.
The debris that could puncture tyres or jump to affect other vehicles if climbed on have also been cleared up from the road, the Federal Road Safety Corps said in a statement on Wednesday.
Before then, the road was closed to traffic, leading to several kilometres of traffic, which spread right into the heart of the seat of power in Lagos State, Alausa.
The tanker caught fire on Tuesday at about 7:10pm in front of OPIC Plaza in the Ogun State portion of the expressway.
Traffic out of Lagos had to be diverted to one lane of the inward Lagos bound traffic.