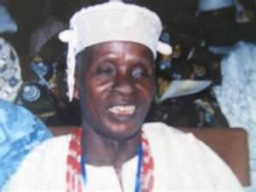 Popular Nigerian actor in the Yoruba movie genre, Pa Akin Ogungbe, died on Wednesday at his Abeokuta, Ogun state home after battling with an undisclosed ailment.
Ogungbe, who was aged 78, started acting decades before the advent of home videos in Nigeria.
He was one of the greatest theatre practitioners of his time.
Apart from stage plays, Ogungbe had many plays made specifically for television productions.
One of his most popular works was “Ireke Onibudo” of the famous D.O. Fagunwa novel written in the 1950s, which he made into a movie.
His son, Segun Ogungbe, who is now a big time actor and movie producer, confirmed his death.
Ogungbe’s death is coming months after Albert Kosemani Olayemi, otherwise known as Gorimapa of the Village Headmaster fame, died in Eko Hospital, Ikeja, Lagos after a protracted illness.